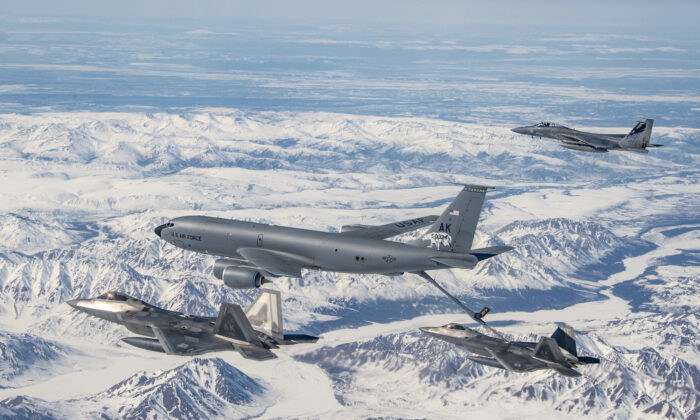 A KC-135 Stratotanker from the 168th Air Refueling Wing refuels F-22 Raptors from the 3rd Wing over the Joint Pacific Alaska Range Complex flying along side with an F-15 Eagles from the 144th Fighter Wing, on April 18, 2022. (Air National Guard photo by Master Sgt. Charles Vaughn)
US News

The two Russian aircraft stayed in international airspace and didn’t enter American nor Canadian sovereign airspace, according to officials.

“This recent Russian activity in the North American ADIZ is not seen as a threat nor is the activity seen as provocative,” NORAD said in a statement on Monday.

“NORAD tracks and positively identifies foreign military aircraft that enter the ADIZ, and routinely monitors foreign aircraft movements and as required, escorts them from the ADIZ.”

NORAD uses a sophisticated overlapping network of satellites, ground-based radars, airborne radar, and fighter aircraft to track and identify aircraft, according to the agency.

“We remain ready to employ a number of response options in the defense of North America and Arctic sovereignty,” NORAD said.

The Russian aircraft flew within the ADIZ before NORAD is conducting the air defense operation Noble Defender in the region between Sept. 12 and 14.

The military operation involves aircraft and personnel from the United States and Canada flying at high altitudes over sparsely populated Arctic and Pacific areas where the public is not likely to see or hear them, according to NORAD.

“Operation Noble Defender is a routine series of long-planned NORAD operations that validate NORAD Command’s capability to defend Canada and the United States from every avenue of approach, and demonstrate the ability to integrate with other defense and security partners for a holistic, 360-degree defense of North America,” NORAD said in a statement on Sept. 6.

Military personnel are practicing their ability to rapidly deploy assets and conduct operations in that region aimed at quickly deterring, defending, or defeating threats to North America.

NORAD is a bi-national command charged with the defense of the United States and Canada operating since 1958. Its three primary missions are aerospace warning, aerospace control, and maritime warning of threats against North America.