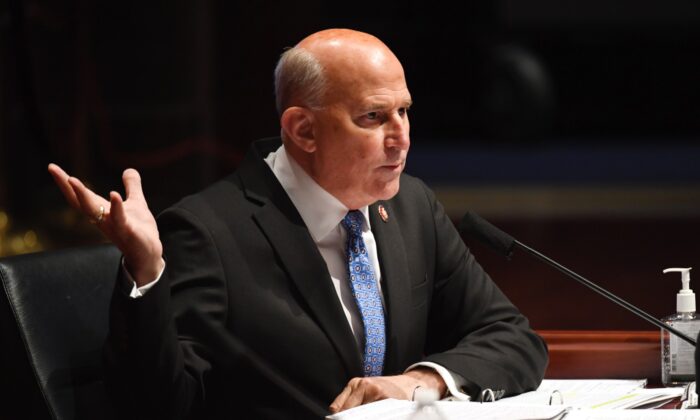 Two GOP lawmakers are facing $5,000 fines each after being accused of wrongly bypassing newly installed metal detectors inside the U.S. Capitol, violating a new rule adopted earlier this week.

House Speaker Nancy Pelosi proposed the rule change that passed 216 to 210 Tuesday night. The change means that any lawmaker who refuses to go through the metal detectors faces a fine of $5,000 for a first offense and $10,000 for a second offense, deducted directly from their paychecks.

Pelosi is also accused of breaking her own rule by allegedly bypassing a metal detector on her way into the House chamber. Republicans from the Committee on House Administration on Friday requested that the House Sergeant at Arms imposes a fine on her.

Reps. Louie Gohmert (R-Texas) and Andrew Clyde (R-Ga.) are the two lawmakers who have been issued the fine. Clyde hasn’t immediately commented on the offense, though Gohmert has released a statement on Friday.

Gohmert said the incident happened on Thursday, and that for weeks he has been complying with Pelosi’s “unconstitutional metal detector policy.”

“I stepped off the House floor to use the restroom right beside the Speaker’s lobby as I have done many times since the metal detectors have been installed,” the Republican lawmaker wrote in the statement.

Gohmert said he hasn’t been required to be screened for a second time after using the restroom since the metal detectors were installed, claiming that no one ever mentioned or made that a requirement until yesterday.

“Unlike in the movie The Godfather, there are no toilets with tanks where one could hide a gun, so my reentry onto the House floor should have been a non-issue,” the lawmaker said.

Pelosi proposed the rule after metal detectors were installed outside the House chamber several days after the Jan. 6 breach of the Capitol.

“Many House Republicans have disrespected our heroes by verbally abusing them and refusing to adhere to basic precautions keeping members of our Congressional community, including the Capitol Police, safe,” Pelosi claimed in a Jan. 13 statement.

Gohmert said the fine issued against him has “nothing to do with following the rules,” adding that he thinks it’s just another way of “furthering the Democrats’ never ending scheme to demonize and punish their political opponents.”

The lawmaker wrote in the release he will be appealing the fine and take whatever action is necessary, especially considering this policy is unconstitutional.

Besides fining lawmakers who refuse or wrongly bypass metal detectors, Pelosi has also imposed fines for lawmakers who fail to wear face masks.

Failure to wear a mask will result in a $500 fine on the first offense and a $2,500 for a second offense. The fines will also be deducted directly from the lawmakers’ paychecks.