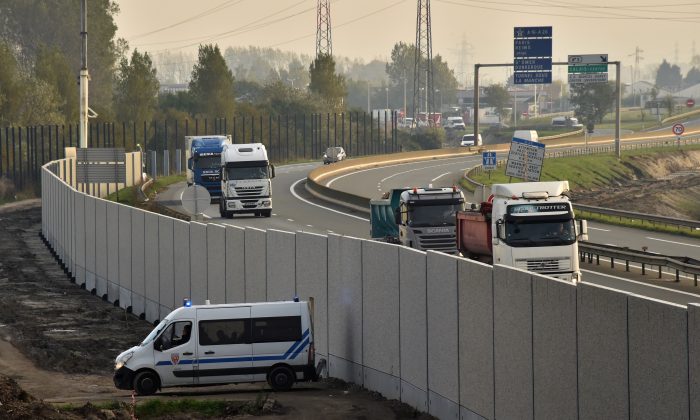 A police vehicle next to a concrete 4-metre-high wall in Calais, northern France on October 26, 2016. (PHILIPPE HUGUEN/AFP/Getty Images)
Europe

PARIS—Three masked thieves stopped a Bentley carrying two Qatari sisters on a highway north of Paris, sprayed their driver with tear gas and stole belongings worth as much as 5 million euros ($5.3 million), French officials said Tuesday.

An official familiar with the investigation said the sisters, aged 60 and 61, were targeted on the A1 highway en route to Paris’ high-end 16th arrondissement after arriving in a private jet Monday night at the Le Bourget Airport.

The two officials were not authorized to speak publicly about ongoing investigations.

The French driver, who works for the women on a regular basis, reported the incident to police.

The first official said the three robbers were in a car which forced the Bentley off the highway and then to stop in an emergency zone.

The sisters’ names were not released.

Earlier this month, Bollywood actress Mallika Sherawat and partner Cyrille Auxenfans were the targets of a robbery attempt, also involving tear gas, in their home in a wealthy area of Paris. The robbers fled empty-handed.

In 2014, a Saudi prince’s diplomatic convoy was ambushed in a heist similar to Monday’s one, as it headed to Le Bourget Airport, commonly used for private jets.