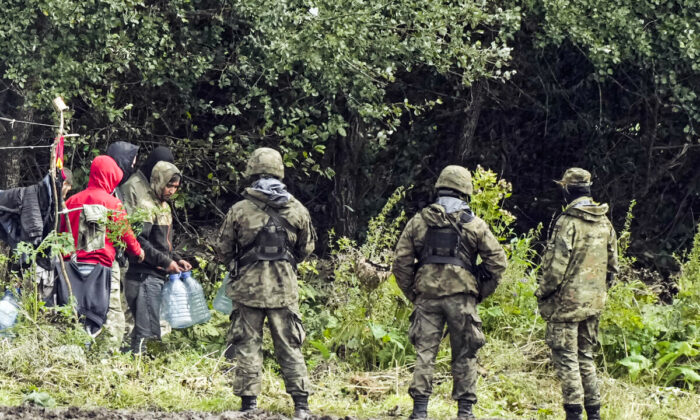 WARSAW, Poland—Officials in Poland said on Monday that two soldiers were lightly hurt when a group of some 60 illegal aliens tried to force their way across the border from Belarus.

The Border Guards office said the troops—who have been deployed to help protect the European Union’s eastern border from growing illegal immigration pressure—were treated at a hospital for facial injuries following the events Sunday near the village of Usnarz Gorny.

They said in a statement that the illegal aliens were throwing stones and wielding branches. That part of the border is in a dense forest that also includes bogs. Most of the border with Belarus runs along the Bug river.

A video showing men trying to break the razor wire border fence with a branch and helmeted Polish troops watching from nearby was posted on the Border Guards website.

Poland and the Baltic states, which are members of the European Union, are facing pressure on their borders with Belarus. They say the government in Minsk is facilitating crossings for illegal aliens, mostly from the Middle East and Africa, in order to destabilize the bloc in retaliation for Western sanctions.

Poland has built a fence on the border and put some 7,000 guards, troops, and police to prevent crossings, and is pushing back those who cross, but thousands are still getting through. Most are heading toward Germany.

A group of some 30 migrants that had been stranded in the border strip since August is no longer there, the Border Guards statement said. It said some of them were recognized in the group that tried to force the border Sunday.

On Saturday a group of women, including two of Poland’s former first ladies, Jolanta Kwasniewska and Anna Komorowska, protested near the border against pushing the illegal border-crossers—including women and children—into the forest, back to Belarus.

A number of migrants have been found dead close to the border. Humanitarian organizations active in the are have reported finding migrant groups with children who had spent days in the forest.

Poland’s security officials have said that migrants can pay up to $12,000 in their home countries to people promising to get them to the EU, preferably to Germany.

Deputy interior minister, Bartosz Grodecki has said that Poland is seeking cooperation with the European border agency Frontex to arrange readmission, or return flights directly to migrants’ home countries, according to the English-language service of Poland’s state PAP news agency.

Illegal aliens who cross into Poland can ask for international protection, which would cover all of the EU. While waiting for a decision, which is most often a refusal, they are placed in guarded centers for foreigners. They mostly come from Iraq, Iran, and Syria.