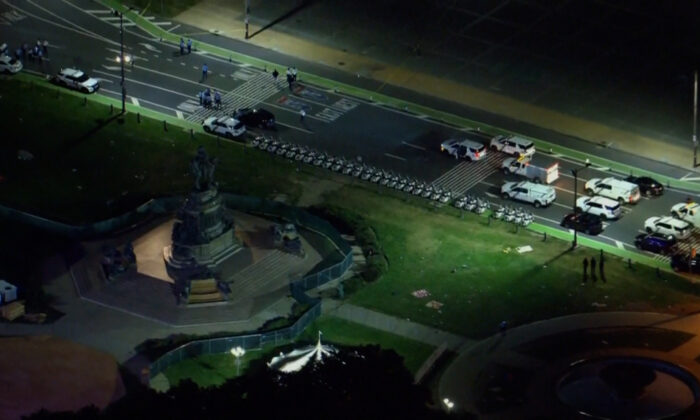 The Benjamin Franklin Parkway during the July 4th fireworks show in Philadelphia on July 4, 2022. (Courtesy of KYW)
Crime and Incidents

Two police officers sustained injuries after they were shot in Philadelphia, Pennsylvania, during fireworks to celebrate the fourth of July, according to reports.

The officers were sent to the Jefferson University Hospital and were reported in stable condition as of late Monday, reported WPVI.

The shooting took place a little before 10 p.m. along the Ben Franklin Parkway in Philadelphia, near the Philadelphia Museum of Art, just as the fireworks display was getting started after a music concert celebrating the July 4 holiday had ended.

“For those looking to reunite with loved ones on the Parkway, please meet at 1901 Vine Street in front of the Free Library of Philadelphia. All others, please avoid the area,” the Philadelphia Police Department said on Twitter late Monday after shots were fired that sent crowds scattering.

Police have not said what had prompted or triggered the gunfire and no arrests have been reported as of late Monday.

July 4 is a national holiday across the United States that marks when Congress signed the Declaration of Independence in 1776.

Read More
Civic Virtues as Moral Facts: Recovering the Other Half of Our Founding

The shooting that injured the two police officers came just hours after a shooting in a Chicago-area suburb that killed six people and injured at least 24 others. A suspect has been taken into custody.