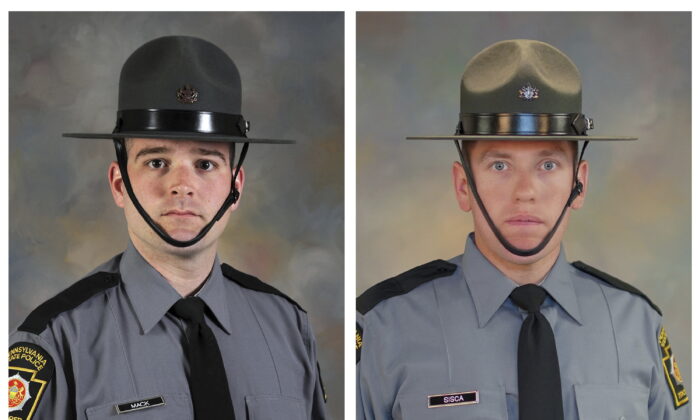 PHILADELPHIA—State police have opened a driving under the influence investigation following the deaths of two Pennsylvania troopers and a civilian struck by a vehicle on an interstate in Philadelphia early Monday, state police said.

Trooper Martin F. Mack III and Trooper Branden T. Sisca were dispatched after a man was reported walking in the southbound lanes of I-95 near the sports stadiums in South Philadelphia, Capt. James Kemm said.

The troopers arrived around 12:45 a.m. Monday and were trying to take the man into custody and walk him back to their vehicle when another vehicle “traveling at a high rate of speed” struck all three, Kemm said.

“The impact was so great that it threw the troopers over into the northbound lanes of Interstate 95,” Kemm said. The vehicle ended up on the right-side shoulder of the highway and the driver remained at the scene. Other arriving troopers found witnesses trying to revive the victims, who were pronounced dead at the scene, Kemm said.

“Right now, we are conducting an active investigation that is DUI-related,” Kemm said. The pedestrian’s name is not being released pending notification of his relatives.

Mack, 33, enlisted in November 2014 and has been assigned to the Philadelphia barracks since 2015. Sisca, 29, enlisted in February of last year and graduated in August.

Col. Robert Evanchick, the state police commissioner, said the troopers “made the ultimate sacrifice,” braving the dangers of traffic at night on the busy highway to aid someone whose own life was in danger.

“These troopers personified our department’s core values of honor, service, integrity, respect, trust, courage and duty,” he said. “… They both had bright careers ahead of them, and it saddens me to know how their lives were senselessly cut short.”

The Pennsylvania State Troopers Association said both troopers were organ donors and have donated their organs to the Gift of Life Program.

Gov. Tom Wolf ordered state flags to fly at half-staff through Friday in their honor, calling it “a very sad day for Pennsylvania.” He called it a reminder of the heroism of state troopers who “lay their lives on the line for all of us every day.”