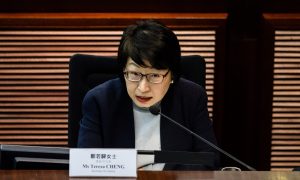 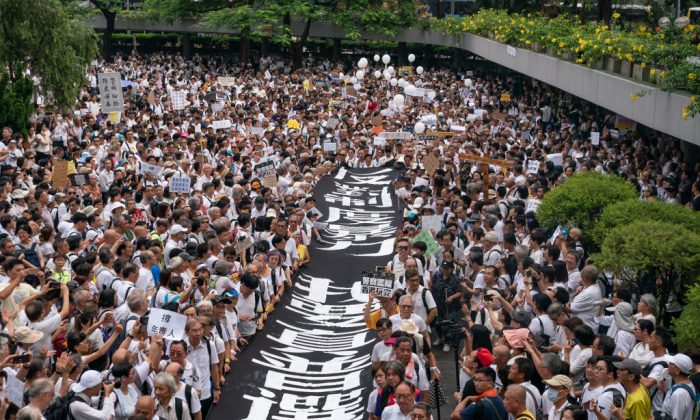 Protesters who are representing the elderly community take part in a march against the extradition bill in Hong Kong on July 17, 2019. (Anthony Kwan/Getty Images)
Asia & Pacific

Two groups are set to take to the streets of Hong Kong this Sunday. Although marching for different causes, both groups have a message directed at Beijing who they are intent on hearing their demands.

Civil Human Rights Front (CHRF), the main opposition group behind the ongoing protests against Hong Kong’s controversial extradition bill, is set to hold another march from Victoria Park in Causeway Bay to Luard Road in Wan Chai this afternoon.

According to CHRF’s Facebook page, the July 21 march calls for the Hong Kong government to set up an independent commission of inquiry to investigate police actions over the past month after police were widely criticized for using excessive force against protesters.

On June 12, local police resorted to pepper spray, tear gas, rubber bullets, and bean bags in efforts to disperse protesters after a group tried to break the police line outside of the legislative council (LegCo). Over 80 civilians were injured as a result.

On July 14, human rights groups also condemned police for engaging with the protesters inside a shopping mall in Sha Tin. Scores of protesters were injured and more than 45 protesters were subsequently arrested.

CHRF is also calling for the pro-Beijing majority government to meet four other demands: a complete withdrawal of the extradition bill; a withdrawal of the term riot used to describe earlier protests; the prosecution of arrested protesters to be dropped; and for open elections for LegCo members and the city’s top leader, the position currently held by Carrie Lam.

Luard Road was not the original destination of the march—CHRF had wanted to end the march at the Hong Kong’s Court of Final Appeal in Central to emphasize their demand for an independent commission of inquiry. According to local media, the police cited safety concerns for the change in the march’s destination.

CHRF subsequently appealed the police’s decision at the Appeal Board on Public Meetings and Processions but its request was turned down.

Jimmy Sham, CHRF’s convener, has since told Hong Kong media that CHRF will still send a dozen people to lay down banners at the feet of the Lady Justice statue outside of the Court of Final Appeal for the July 21 march. Sham said that of the three branches of the Hong Kong government—executive, legislative, and judicial—only the judicial body can still be trusted.

The extradition bill would allow any country, including mainland China, to seek the extradition of criminal suspects from Hong Kong. The proposal has drawn widespread opposition, with many Hongkongers worried that if the bill were to pass, Beijing could potentially pressure the city government to hand over citizens of any nationality to face trial in the Chinese regime’s opaque court system that often disregards the rule of law.

To date, the CHRF has organized three other mass protests—one on June 9 that drew 1.03 million people, a second on June 16 that had about 2 million participants, and a third on July 1 that saw an estimated 550,000 people take part.

A group of Hongkongers, including activists, students, and artists, read out the “Manifesto of Hong Kong Protesters” in a YouTube video published on July 20. The manifesto was first read on July 1 when protesters temporarily took over the LegCo after smashing glass doors to gain entry into the building.

According to HKFP, the maker of the video was Hong Kong’s Anti-extradition Law Campaign, which issued a statement with the video. It stated that the manifesto “showed how determined Hongkongers could be in defense of freedom and in pursuit of democracy, even in the worst of times.”

Before the CHRF’s march, Hong Kong’s Falun Gong Association will also hold a march to commemorate the 20th anniversary of China’s persecution.

Falun Gong, also known as Falun Dafa, is an ancient spiritual practice with meditative exercises and moral teachings based on truthfulness, compassion, and tolerance. The group enjoyed enormous popularity by the late 1990s, with official estimates putting the number of adherents at about 70 million to 100 million in China.

However, former Chinese Communist Party leader Jiang Zemin viewed the group’s popularity as a threat to his rule. On July 20, 1999, Jiang launched a country-wide persecution to round up practitioners and throw them into prisons, brainwashing centers, labor camps, and psychiatric wards in an effort to force them to abandon their faith.

To commemorate the persecution, there have been marches and rallies in multiple cities around the world in recent days, including Washington D.C., New York, Los Angeles, Melbourne, Taipei, Kyoto, Seoul, Paris, Toronto, and Ottawa.

U.S. Rep. Steve Chabot (R-Ohio) spoke at a rally in Washington on July 18, during which he condemned Beijing for launching a “truly barbaric” persecution.

Speaking during a candlelight vigil in Taipei on July 20, Huang Kuo-chang, a Taiwanese lawmaker, stated that he believed the Chinese regime’s reign over China would eventually come to an end one day, and then freedom of religion, freedom of speech, and democracy will “shine” on the mainland.

Epoch Media Group will be broadcasting both marches live from The Epoch Times and NTD Television’s YouTube and Facebook pages.