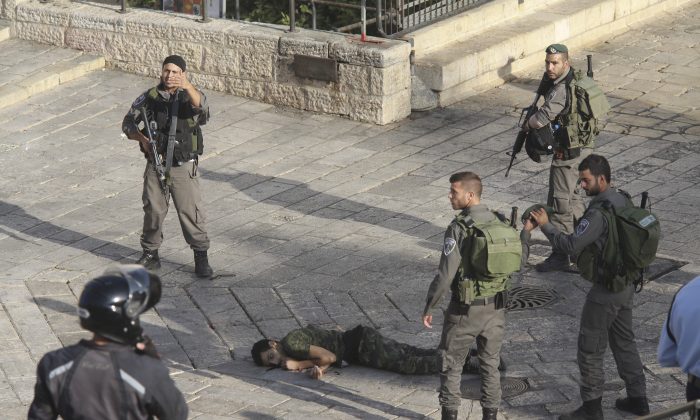 JERUSALEM—Israeli forces on Thursday shot and killed two Palestinians, including one who stabbed a soldier, Israeli authorities said, the latest in a string of clashes in the volatile West Bank city of Hebron.

In recent days, Hebron has become a focus of clashes following six weeks of Israeli-Palestinian violence. The city, where several hundred nationalist Israeli settlers live in fortified enclaves amid tens of thousands of Palestinians, is a frequent flashpoint of unrest.

In the latest violence, police said a 23-year-old Palestinian man stabbed a soldier in the head, wounding him lightly, and then attempted to stab another security officer before forces shot and killed him. The Palestinian approached soldiers at a checkpoint as clashes between Palestinian protesters and Israeli troops erupted nearby, police said.

Later, forces shot and killed another Palestinian who the military said attempted to stab an Israeli soldier. But a Palestinian witness at the scene, community activist Issa Amro, challenged the Israeli account, saying he had not seen a knife. Palestinians have repeatedly accused the army of using unnecessary or excessive force, a charge that Israel denies.

Hebron has been the site of days of clashes between Palestinians and Israeli troops, and also the scene of several stabbing attacks by Palestinians. The Israeli military said Thursday that a Palestinian who tried to stab a soldier in the city on Wednesday died after forces shot him.

The incident involving the 23-year-old Palestinian on Thursday took place near a disputed shrine known to Jews as the Cave of the Patriarchs, where the Bible says the patriarchs Abraham, Isaac and Jacob were buried along with three of their wives. Muslims call it the al-Ibrahimi mosque, reflecting the fact that Abraham is considered the father of both Judaism and Islam.

The current wave of violence began in mid-September in Jerusalem amid tensions over a sensitive holy site and quickly spread deeper into Israel, the West Bank and the Gaza Strip. Eleven Israelis have been killed in Palestinian attacks. In that time, 58 Palestinians have been killed, 38 said by Israel to be attackers, the remainder killed in clashes with Israeli troops.

Also Thursday, Israel’s Justice Ministry said an Arab woman who was shot after brandishing a knife at a busy bus station did not intend to carry out an attack.

The 29-year-old woman, Asraa Abed, was surrounded by Israeli forces and then shot after she drew a knife at a bus station in northern Israel earlier this month. The Justice Ministry said an investigation determined the woman was mentally unstable and suicidal and had pulled out the knife in order to be shot and killed. Abed, who survived the shooting, was indicted Thursday for carrying a knife.

The incident was caught on video, which showed her slowly waving the knife before she is surrounded and shot. Palestinians have cited the incident in their claims that Israel has used excessive force during the current spate of violence.