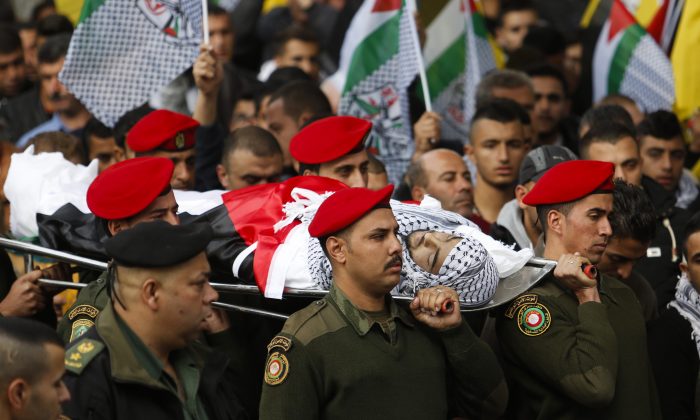 JERUSALEM—Two Palestinians were shot and killed in separate clashes with Israeli security forces in the West Bank on Thursday as Israel announced plans to strengthen a fence near the flashpoint city of Hebron in an effort to contain a two-month spate of violence.

In the first incident, the Israeli military said a clash erupted after troops raided the village of Qattana overnight to search for ammunition and arrest suspected assailants. The Palestinians hurled firebombs and stones at troops, according to the army.

Yehya Taha, 21, was shot in the head and later died, according to Palestinian Health Ministry spokesman Mohammed Awawdeh.

Later Thursday, Israeli border guards shot and killed a Palestinian attacker wielding a knife near the West Bank city of Nablus. Police spokeswoman Luba Samri said the man got out of a taxi near a military post and began running toward officers, brandishing a knife. No Israelis were hurt in that attack, Samri added. She did not say how close the man got to the Israeli forces.

The two deaths were the latest in a two-month wave of violence. Since mid-September, 19 Israelis have died in Palestinian attacks, mostly stabbings and shootings. At least 93 Palestinians have also died, including 58 said by Israel to be attackers. The others died in clashes with Israeli forces.

In an effort to quell the violence, Defense Minister Moshe Yaalon announced Wednesday that Israel will fortify an existing fence west of Hebron, a southern West Bank city that has been a flashpoint in the current unrest. Yaalon said attackers have managed to get through the structure in recent weeks.

“We intend to bring a far more massive barrier there…in light of the bitter experience with the physical damage to this barrier,” Yaalon said. “I definitely identify this area as a weak point, from both a security and criminal perspective.”

The approximately 25-mile (40-kilometer) stretch of fence is part of a sprawling West Bank separation barrier that Israel has built over the last decade or so. Israel says the structure is a security measure meant to keep attackers out of its cities. But the Palestinians say the structure is a land grab, since it places sections of the West Bank on the “Israeli” side. The Palestinians claim all of the West Bank for part of a future state.

Yaalon told lawmakers that the project will take a year. The fence will have similar technology as the recently constructed Israeli fence on the Egyptian frontier meant to prevent infiltration by militants and African migrants. Egypt is struggling to put down an Islamic insurgency in the volatile northern Sinai Peninsula, which borders Israel.

Also Thursday, Israeli troops seized eight public transportation buses in the West Bank city of Nablus, according to drivers at the Al-Tamimi company. The military said the buses were intended to ferry Palestinians to checkpoints for demonstrations against Israeli troops.

Surge in Israeli-Palestinian Violence Ahead of Kerry Visit

An Israeli official said government officials, however, have rejected the military’s proposals. Both the officer and the official spoke on condition of anonymity because the offer has not been made public. Prime Minister Benjamin Netanyahu has said he opposes confidence-building gestures to the Palestinians until the violence subsides.

On Wednesday, Israel’s parliament advanced a bill that would allow the jailing of minors younger than 14. Children as young as 11 have stabbed Israelis in the current unrest.

The bill, announced on parliament’s website, follows a law adopted in early November to toughen penalties against Palestinians for throwing rocks at civilians and security personnel. That law imposes a minimum sentence of three years on rock throwers, and can strip them and the parents of minors of losing social security benefits.

The latest bill passed a preliminary vote, but would require further approvals to become law.