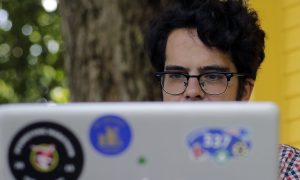 Two of four people who were found dead inside a North Dakota business have been identified by a family member a day after it unfolded.

Police haven’t identified any of the victims, but Briann Miller told The Associated Press that her stepfather, Bill Cobb, and mother, Lois Cobb, were among those killed.

Officials didn’t give any details about the Cobbs’ causes of death. They were found at an RJR Maintenance & Management building in Mandan.

“I just know that it was an attack,” Miller told AP. “I don’t know how it happened, what it happened with. I’m left in the dark still. None of this makes any sense. All I know is my parents are gone.”

She said there were no indications that they had any problems at work. The couple had moved from Illinois to North Dakota six years ago.

Four people were found dead inside an office in Mandan, North Dakota. Police aren’t saying how they died but are investigating it as a multiple homicide. https://t.co/NW3in2v6bS pic.twitter.com/MxERYzseFm

Mandan Police Chief Jason Ziegler said the four bodies were found at RJR Maintenance & Management after someone called 911, according to USA Today.

“The crime scene is contained,” Ziegler said. “It looks like an isolated incident.”

“It’s very [said] that there are people in this world that would do something like what we had to experience today,” Ziegler continued. “You [don’t] wake up early Monday morning expecting to get this phone call.”

We will be closed today.

According to CrimeOnline, a Facebook post was made by RJR Maintenance & Management on the morning of April 1. “We will be closed today,” it read, without offering any explanation. It’s not clear if the post was made before or after the four people died.

She added that “if everyone that’s following this post could say a prayer for everyone’s family involved in this tragedy, that would be really nice … hug your loved ones extra tight & never let them forget how much you love them.”

We will be closed again today. We are sorry for the inconvenience. We will be spending this time discussing our process to move forward and grieve the great losses.

In another post on April 2, the firm said it is “sorry for the inconvenience,” adding: “We will be spending this time discussing our process to move forward and grieve the great losses.”

“To whoever made a senseless act & took the lives of 4 innocent people out of anger or whatever it was.. did you know 2 of them were my parents? did you know they were grandparents who are unconditionally loved by 3 tiny humans.. did you know that my step dad would give you the shirt off his back if you had just asked?” she wrote, reported the Daily Mail.

She added that her “whole world came crashing down” after she learned the news.