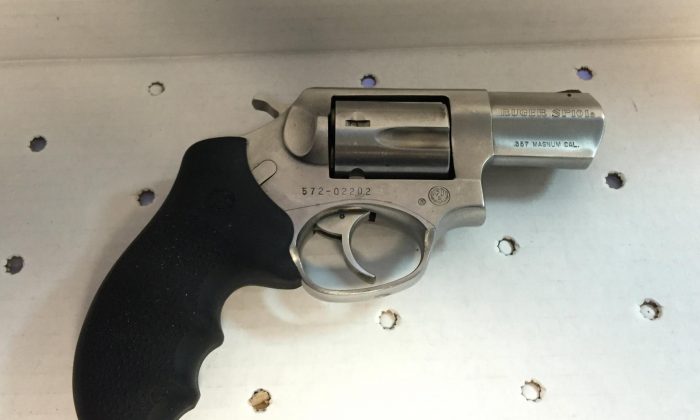 A revolver that was found in the front seat of a suspect, who crashed his car into a police vehicle, Saturday, Feb. 20, 2016 in New York. Two New York City Police officers were injured in a shootout with the suspect, Jamal Funes, early Saturday. Funes, was shot multiple times and was in critical condition at Brookdale Hospital, Police Commissioner William Bratton said. (Photo provided by NYPD)
Crime and Incidents

NEW YORK—Two New York City Police officers were injured early Saturday in a shootout with a suspect who crashed his car into a police vehicle, police said.

One plainclothes officer was struck in his bulletproof vest and suffered blunt force trauma during the shootout in Brooklyn just before 3:30 a.m. Saturday. Another was shot in the right hip, Police Commissioner William Bratton said. Both were in stable condition at Kings County Hospital and were expected to make a full recovery.

The suspect, 34-year-old Jamal Funes, was shot multiple times and was in critical condition at Brookdale Hospital, Bratton said.

Bratton said the confrontation started when two uniformed housing police officers heard gunfire. As they approached Funes, he pointed a revolver and fled.

Both officers were hit during the shootout. Their names were not immediately released.

“The bottom line today is: Thank God both these officers will be making a full recovery,” said Mayor Bill de Blasio, who visited the officers in the hospital and then joined Bratton at a news conference. “And thank God for what they do for us.”

De Blasio said one of the officers is a nine-year police veteran with two children and is expecting a third. He said the other officer has been with the department for three years.

Police said a .357 revolver was found in the front seat of Funes’ car.

Two NYPD Officers Shot In BrooklynAt approximately 3:20 a.m. this morning, during the apprehension of an armed suspect…