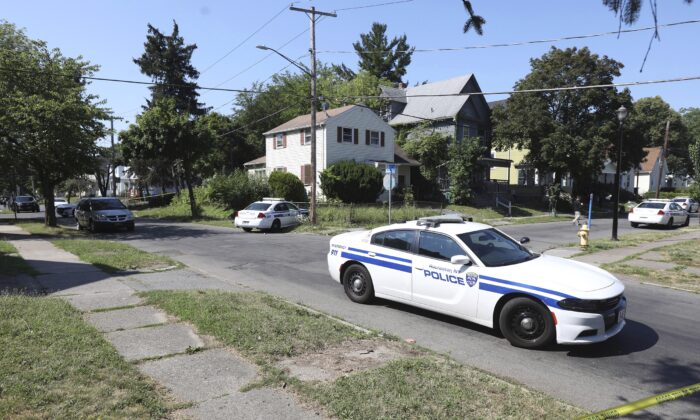 Rochester police collect evidence in the area of Bauman and Laser Streets where two officers were shot last night, in Rochester, N.Y., on July 22, 2022. (Tina MacIntyre-Yee/Democrat & Chronicle via AP)
Crime and Incidents

A police officer in Rochester, New York, was shot and killed on Thursday, while another was wounded, in a shooting that happened in the northeastern part of the city, authorities said.

Both officers were hospitalized, but one of them later died, police confirmed. A third person was also wounded in the incident. Her condition and the circumstances of the shooting weren’t immediately clear.

In a July 22 press briefing, Rochester Police Department (RPD) Chief David Smith said Anthony Mazurkiewicz, a 29-year veteran of the police force, was shot at least once in the upper part of his body.

“Last night, Officer Mazurkiewicz and his partner … were attacked in a cowardly ambush and fell victim to the very violence in our community that we are trying to combat,” Smith told the briefing. “[Mazurkiewicz] was transported to [Strong Memorial Hospital]—but despite heroic efforts, he passed away.”

Officer Sino Seng, an 8-year veteran, was shot at least once in the lower body and treated at a local hospital. He has since been released and is “recuperating from his injuries at home with his wife and children,” the chief said.

“Yesterday morning … I was asked by the media, ‘how dangerous is it out there for the Officers of the Rochester Police Department?'” Smith said, Spectrum News reported.

“My response was that every day, the men and women of this department leave home, not knowing if they are going to return home at the end of their shift,” he said. “Ten hours later, Officer Anthony Mazurkiewicz, a father, a husband, and a 29-year veteran of the [RPD], was killed in the line of duty on Bauman Street while in service to our community.”

RPD Lt. Gregory Bello, a spokesman of the department, said both officers were shot at about 9:15 p.m. by what appears to be a lone man. He noted that he didn’t know if the shooter was in police custody or still being sought.

“They were doing their jobs as police officers, and at least one male approached them and opened fire on them,” Bello said.

The shooting happened on the very same day that Mayor Malik Evans declared a state of emergency in response to violent crime in the city of Rochester.

“This is a tragedy for our community. I’m asking Rochester to pray for these officers and their families,” Evans told reporters near the scene of the shooting. “They go out every day and put their lives on the line. And while there are some people who sit on the sidelines, these guys are on the front lines, trying to keep our community safe.”

The mayor’s declaration will give authorities the power to shut down streets if they are particularly problematic. It will also allow the RPD to expand its coordinated efforts with the State Police and the U.S. Marshal’s Office.

“What I know that is with this emergency declaration, this will give us the ability to not only marshal other resources, but also be very targeted in areas to stop people from continuing to wreak havoc in our city,” Evans said on Thursday.

The department also revealed that 84.8 percent of those involved in the 174 reported shootings that occurred in the city this year were black, and 14.7 percent were white. Another 0.5 percent of the cases were marked as “unknown.” More than 80 percent of the homicides involved guns.