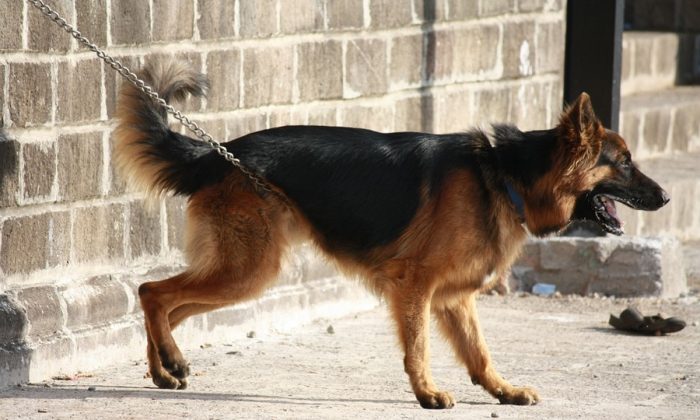 Two men were arrested and charged on May 31 with felony animal cruelty for repeatedly strangulating and killing a German Shepherd pet dog in Yancey County, North Carolina.

Sheriff Gary Banks told the media that Belvin’s younger daughter was eating some food and the pet was behind her and bit her ear while the father was asleep.

When he woke up and saw her daughter’s bitten ear, he and his brother-in-law, Elkins, went looking for the dog.

Banks explained how Belvin removed his belt and strangled the dog while Elkins kept a grip on him.

For about an hour, the duo kept choking the dog repeatedly, eventually leading to his death on May 25.

Blevins and Elkins were talking to some people about what they did with their pet when a woman overheard them. She reported the crime to the sheriff.

The husband of a dog groomer has been charged with the felony of harm to companion animals for shooting and killing four of her client’s dogs, including a therapy pet, at their home in Ohio on June 2.

Philip Taylor, 54, has been released from jail after appearing in court on June 3. He was ordered to not have contact with his wife and surrender his firearms, according to 13ABC.

Theresa Taylor and her husband Philip, were dog-sitting four dogs in their Williams County, Ohio home that weekend, according to the news outlet. Theresa said when she got home, her husband threatened to kill her, so she left.

“He just kept texting me and telling me that he was killing my dogs and if I wanted to save them I’d have to come back and let him take me,” Theresa said via 13ABC.

Philip then shot and killed four of the dogs in their care—Princess, Topaz, Skylar, and Lily. Lily was a therapy dog for one of Theresa’s clients who was injured in a car accident.

“My wife was just… the compassion I felt for my wife was just unbelievable. She was really upset,” Randy Beck, Lily’s owner, told 13ABC.

Beck said he wishes he knew about Taylor’s situation before bringing his dog into their home.

“I wish she would have come and said ‘Hey I’m having personal problems, maybe don’t bring the dog in for grooming.’ Had she done that we wouldn’t have brought Lily in and she’d be alive today,” Beck told the news outlet.

Theresa, who owns a brick-and-mortar dog grooming business in Archbold, Ohio, wrote about the incident in a Facebook post: “The dogs at my house have been murdered by my Now EXhusband and I lost 4 of the most precious little soles (sic) in the world.”

Theresa said that it’s difficult for her to cope with the tragedy but she’s back to work at her dog salon trying to move on.

“My world is broken but today I will start a new life. And I am taking all of you with me. If I didn’t get to your message last night. This is your return message. Everything at the salon is normal,” she wrote in a Facebook post on June 3.

Theresa told 13ABC that she and Philip have had problems in the past but never this severe.