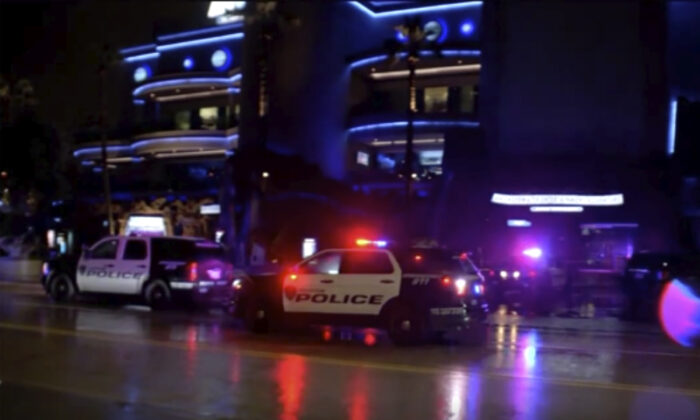 Police vehicles park outside the scene of a restaurant shooting Thursday, July 8, 2021, in Houston, Texas.(KTRK via AP)
Crime and Incidents

HOUSTON—Two men died and a woman was wounded in what Houston police said was a murder-suicide at a downtown seafood restaurant.

The shooting happened shortly after 8 p.m. Thursday as a man and woman were finishing dinner in the bar of the Aquarium Restaurant, Houston police Executive Assistant Chief Matt Slinkard said.

Witnesses said, and security video at the restaurant showed, that a man at the other end of the bar stood up, walked over and shot both. The suspect then shot himself once fatally, Slinkard said.

“You know, this is a horribly tragic incident, and you know this is the type of situation that should make us all pause, send out as many prayers as we can for all the families and all the lives that would be affected,” he said.

It was unclear how many patrons were at the restaurant, but Slinkard said it wasn’t very crowded.

Elaine Khalil told the Houston Chronicle that she had just started eating dinner with her 13-year-old and 7-year-old children in the restaurant when she heard two sets of gunshots—including one burst of four of five shots.

She told KTRK-TV there was “panic and pandemonium” as people inside ran away.

“The wait staff, they were very composed, they led us to a back staircase where everyone ran out,” she said.