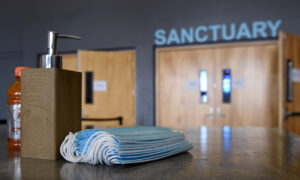 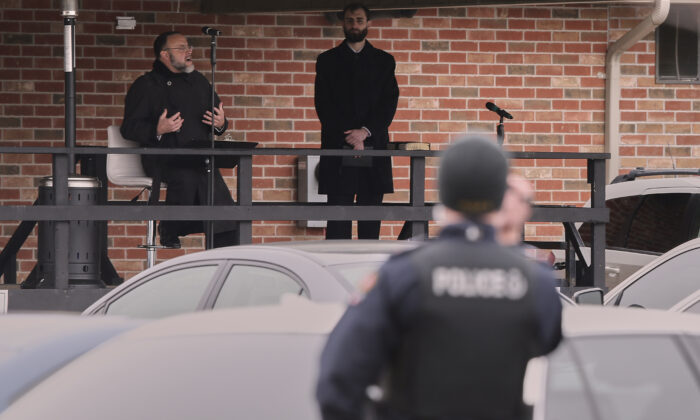 An Aylmer police officer videotapes as Pastor Henry Hildebrandt speaks during a drive-in service at The Church of God in Aylmer, Ontario, Canada, on April 26, 2020. (Geoff Robins/The Canadian Press)
Canada

Two men have been charged by police over large gatherings in a Wheatley, Ontario, church this past weekend.

Chatham-Kent police said they received reports of large gatherings held at the Old Colony Mennonite Church on Dec. 26 and Dec. 27.

When police arrived on both days, they found over 100 people not wearing masks inside the church. A 50-year old man from Merlin, Ontario, who took responsibility for the gathering, was charged on the first day, and another 43-year old Merlin man was charged on the second day.

Both men were charged for failing to comply with the Reopening Ontario Act, police said. The act prohibits churches from holding services with more than 10 people indoors or outdoors during lockdown, which went into effect on Dec. 26 at 12.01 a.m.

Besides the two men, a Windsor pastor was also charged under the act on Dec. 23.

Rev. Dr. Aaron Rock, the lead pastor of Harvest Bible Church Windsor (HBC), was charged for holding an in-person service on Dec. 20, after the region had been shut down by the Ford government on Dec. 14.

“I’m not a virus denier. I’m not an anti-masker. I’m not a foolish man,” Rock told the Windsor Star on Dec. 26. “I’m doing this for the sake of the community.”

Rev. Dr. Tony Costa, a fellow pastor who has known Rock for more than 15 years, said Rock is a “man of high integrity, and a pastor who truly loves the Lord and His people.”

“In light of the Covid-19 restrictions, and having complied for many months with the legal regulations, [Rock] decided to open his church for the many who were hurting, depressed, anxious, unemployed, and some with suicidal ideations in order to provide a haven of support and ministry outreach,” Costa wrote in a GoFundMe campaign set up for Rock’s legal defence. Rock faces a fine of $10,000 to $100,000 and/or one year imprisonment.

Rock told the Windsor Star that the church building at 2001 Spring Garden Road has a capacity of 1,350 people, but the number of people attending the service on Dec. 20 was less than 25 percent capacity.

“Our building is almost as big as Costco, but the government is telling me I can only put 10 people in that building,” Rock said. “[Yet] I can take all my people over to Costco. It shows the state of our culture.”

Windsor police also barred the congregation from entering HBC on Christmas Eve, which the church’s elders council said is “contrary to Section 176 of the Criminal Code and the Canadian Charter of Rights and Freedoms.”

“This is an abhorrent offence to humanity and an affront to religious liberties,” HBC said in a press release on Dec. 24. “To add to this injustice, hardware stores and big box stores remain open so that people can buy their last-minute Christmas gifts, while the church is banned from collectively worshipping the greatest Christmas gift ever given: the Lord Jesus Christ.”

“This is a national disgrace,” the church added.