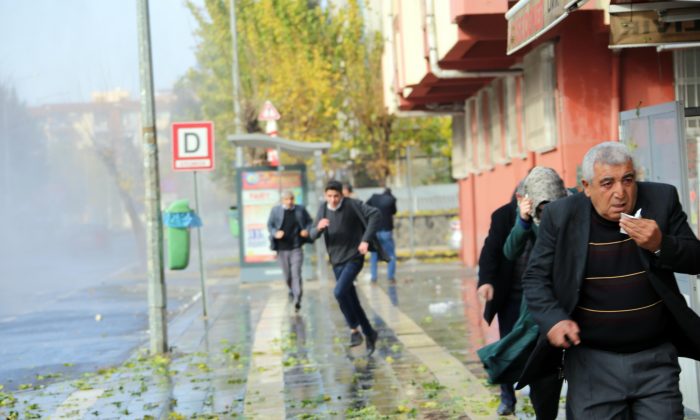 Police use water cannons and teargas to break up a protest by some 5,000 people, denouncing a government-imposed curfew in the historical city center, in Diyarbakir, Turkey, Monday, Dec. 14, 2015. Turkey is imposing dayslong curfews in towns and districts in southeast Turkey as the security forces battle Kurdish militants who dig up ditches or set up barricades. (AP Photo/Mahmut Bozarslan)
Middle East

2 Killed in Clashes in Turkey as Kurds Denounce Curfew

ANKARA, Turkey—Police on Monday clashed with a group of Kurds following a protest by some 5,000 people denouncing a days-long curfew imposed by the government in one neighborhood in the mainly Kurdish city of Diyarbakir. Two people were killed, a human rights group said.

Police used water cannons to break up the demonstration organized by Turkey’s pro-Kurdish political party and also clashed with a group who set up a barricade and set fires on a road in Diyarbakir. Raci Bilici of the Turkish Human Rights Association said two people were killed in the clashes.

Turkey is imposing 24-hour curfews that last for days in towns and districts in southeastern Turkey as the security forces battle Kurdish militants who dig up ditches or set up barricades.

Turkey Withdraws Some Troops From Camp in Iraq

The pro-Kurdish People’s Democracy Party says at least 63 civilians have been killed by security forces’ operations during curfews that have been enforced in 17 locations since August.

The European human rights body, the Council of Europe, has expressed concern over the curfews and has called on Turkey to respect human rights while it battles the Kurdish rebels.

On Monday, thousands tried to march to Diyarbakir’s Sur district to denounce a curfew that was declared in the neighborhood 12 days ago. Sur is the scene of frequent clashes between security forces and Kurdish youths.

Hundreds of people have died since July in renewed fighting between the security forces and the rebels of the banned Kurdistan Workers’ Party, or PKK. The violence has also derailed a fragile peace process with the rebels.

Prime Minister Ahmet Davutoglu said Monday the government is determined to clear the towns and districts of Kurdish militants.