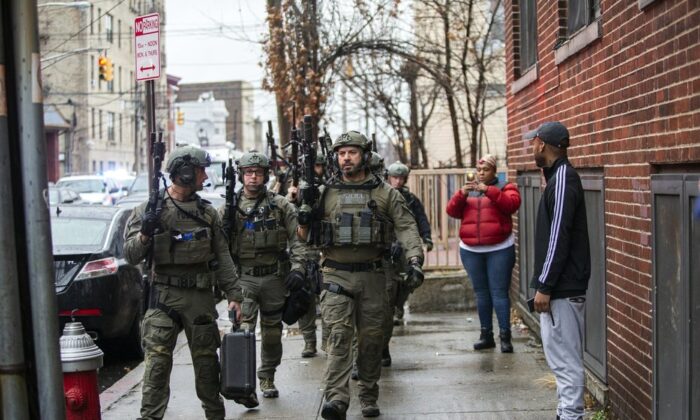 Two suspects, one male and one female, were shot by police, Fox News reported. A third suspect described as a black male wearing all black is on the run, the report said.

“Our thoughts and prayers are with the men and women of the Jersey City Police Department, especially with the officers shot during this standoff, and with the residents and schoolchildren currently under lockdown,” Murphy said in a statement. “I have every confidence in our law enforcement professionals to ensure the safety of the community and resolve this situation.”

I have been briefed on the unfolding situation in Jersey City. Our thoughts and prayers are with the men and women of the Jersey City Police Department, especially with the officers shot during this standoff, and with the residents and schoolchildren currently under lockdown.

NBC New York reported that one officer was shot in the head and is in critical condition.

“We need a lot of prayers right now for Jersey City officers. Keep all those involved in your thoughts,” the New Jersey State Policemen’s Benevolent Association wrote on Twitter.

New Jersey Turnpike exit ramps at Interchange 14B were closed due to the shooting, CBS New York reported.

“NJ Transit Police are assisting Jersey City with an active shooting incident within the area of the west side branch. Stay clear of the area until further notice. HBLR service is suspended. ALL bus service on the West Side Branch is suspended updates to follow,” New Jersey Transit Police posted on Twitter.

#FBI is on scene in Jersey City. The public is asked to stay away from the area of MLK Drive near the light rail station as well as Bay View cemetery. Your cooperation is appreciated.

“All students and staff are safe however ALL school are currently on lockdown due to police activity,” the Jersey City school district wrote on Twitter. It later said students “will not be dismissed until we receive clearance.”

Jersey City Mayor Steven Fulop wrote on Twitter, “For parents: We still have an active scene but all the schools in the area are secure and all children are accounted for. We will provide more information later.”