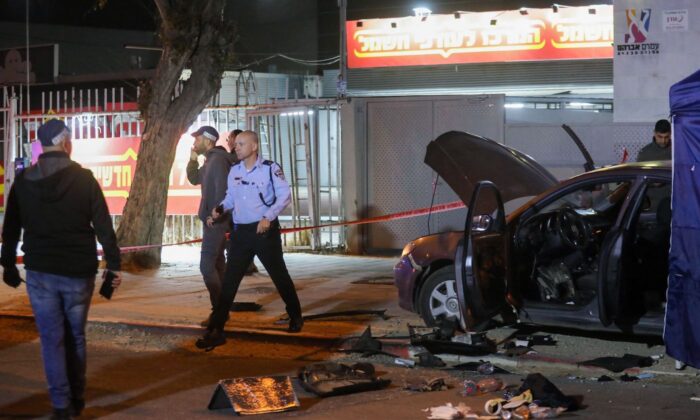 Israeli security forces gather at the site of a terrorist attack that left two Israeli police dead in the northern city of Hadera on March 27, 2022. (Gil Cohen-Magen/AFP via Getty Images)
World

At least two Israeli border police officers were shot dead in an attack on March 27 that was claimed by the ISIS terrorist group.

Several other civilians were injured in the attack carried out in the central Israeli city of Hadera, according to local reports. The two gunmen were killed by undercover police.

Israel’s Border Police identified the two police officers as Yezen Falah and Shirel Abukarat, both 19, the Times of Israel reported.

“The two officers died in battle this evening with armed terrorists,” the Border Police said, praising the officers’ bravery for risking their lives to defend the security of the country.

ISIS claimed responsibility for the attack in a statement posted via Telegram.

Police said the terrorists came to a bus station with 1,100 bullets, three handguns, and six knives. They began shooting toward the two victims and snatched a rifle belonging to one of the victims, the Times of Israel reported.

The terrorists also opened fire on passersby before being shot by undercover police officers dining at a nearby restaurant.

The attack occurred as Israeli Foreign Minister Yair Lapid was hosting a summit with U.S. Secretary of State Antony Blinken and counterparts from the United Arab Emirates, Bahrain, Morocco, and Egypt in Negrev on March 27.

Israel’s Foreign Ministry said in a tweet that all the foreign ministers participating in the summit condemned the Hadera attack and asked to send their condolences to the families of the victims. Lapid called the attack “heinous” and “an attempt by violent extremists to terrorize and to damage the fabric of life” in Israel.

“The State of Israel will uncompromisingly fight terrorism, and we will resolutely stand together with our allies against anyone who tries to harm us,” Lapid said, according to the ministry.

Blinken said in a tweet that the United States condemns “such senseless acts of violence and murder” committed by the terrorists and pledged to “stand with our Israeli partners.”

On March 22, an Arab assailant reportedly killed four people in a stabbing and car-ramming spree in the southern city of Beersheba before being shot and killed by an Israeli citizen.