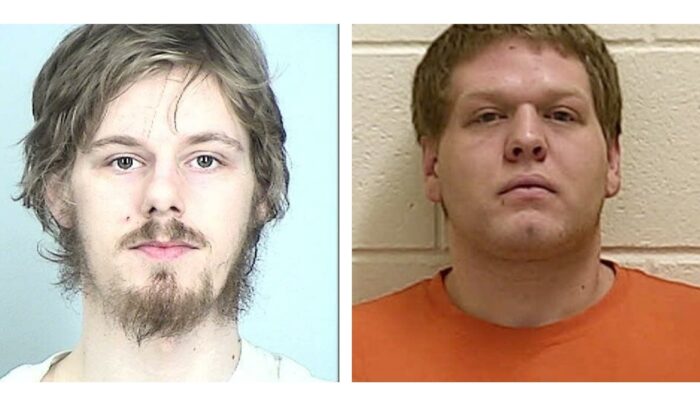 ST. PAUL, Minn.—Two Illinois men who helped bomb a Minnesota mosque in 2017 on Tuesday received prison sentences far below the 35-year mandatory minimum that they had faced, after victims and prosecutors asked for leniency because the men cooperated and testified against the mastermind of the attack.

Michael McWhorter, 33, was sentenced to just under 16 years in prison and Joe Morris, 26, was sentenced to about 14 years. Both testified in the 2020 trial against Emily Claire Hari, the leader of a small Illinois militia group called the “White Rabbits.”

Hari was convicted in late 2020 and sentenced last year to 53 years in prison for the attack on Dar Al-Farooq Islamic Center, a mosque in the Minneapolis suburb of Bloomington.

Frank acknowledged the men were under Hari’s influence, but rejected their attorneys’ requests for 10-year sentences, saying their seven-month crime spree was “contrary to everything America stands for.”

“When all is said and done,” Frank said, anything less would not “promote respect for the law.”

No one was hurt in the Aug. 5, 2017, explosion after a pipe bomb exploded in the imam’s office as worshippers gathered for early morning prayers, but community members were shaken by the incident and the mosque’s executive director testified at Hari’s trial that it led to fear and diminished attendance.

Assistant U.S. Attorney Allison Ethen asked Frank for a 50 percent reduction from the mandatory minimum sentences for McWhorter and Morris—a request that she and Frank both said was rare. But Ethan asked Frank to cap the sentence no lower than 15 years, saying a light sentence would send the wrong message.

“The harm that was done is real, the crime that was committed is real, the horror of what happened that day is real, but what’s also real is our opportunity to offer real forgiveness, and lead by example,” the letter said. “We believe that only through forgiveness can we have any real chance to heal and move forward.”

McWhorter and Morris both pleaded guilty to multiple counts in 2019.

At Hari’s trial, their testimony showed that Hari told them to throw the pipe bomb into the center while Hari waited in a rented truck. Morris testified that Hari told him the mosque was training ISIS terrorists—something the mosque has denied and prosecutors have never alleged.

Hari was the leader of a group called the “White Rabbits 3 Percent Illinois Patriot Freedom Fighters.” In addition to the mosque bombing, the group also robbed a Wal-Mart with airsoft guns, tried to extort the Canadian railroad, invaded homes, and attempted to firebomb a women’s health clinic in Champaign, Illinois.

McWhorter said Tuesday that he feared Hari and Morris may kill him if he didn’t go through with the plan.

“I bombed a mosque. But it was not by choice,” he said. “I feared for my life when I bombed the mosque. I didn’t do it out of just pure hatred. I don’t have any hate” for Muslims.

McWhorter said that in the four years he’s been in jail since his arrest, he’s been studying toward his GED and reading books about Islam. He has made several Muslim friends in jail, he said, some of whom wrote letters on his behalf to Frank.

Morris apologized to those he harmed, saying he was ashamed that he believed the things Hari told him.

“What I did was very, very wrong,” he continued. “But I ask for your mercy.”

He said he planned to return to the Amish community, where he once lived, after finishing his prison term, saying “that’s the only time in my life” I was shown “support and love.” Several members of that community were in court.

Chris Madel, McWhorter’s attorney, said in court filings that McWhorter committed the crimes “at the invitation, direction and plan” of Hari. Madel said his client was manipulated by Hari’s lies about Muslims.

Morris’ attorney, Robert Richman, said his client suffered from undiagnosed mental illness, including schizophrenia and depression. Richman wrote in court documents that Hari took advantage of Morris’ illness, telling him to follow the “angels” speaking to him.

Hari also exerted a special power over Morris, said Richman in the filing. “No one in the world was closer to him. When Hari told Joe to do something, Joe did it. Hari was a hero to Joe. He felt that Hari accepted him.”