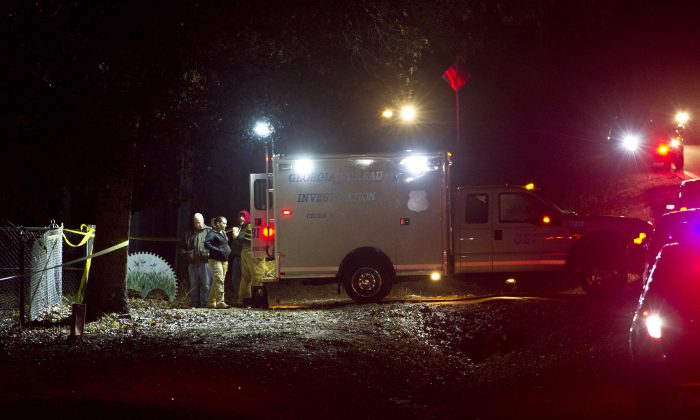 Georgia Bureau of Investigation responds to a shooting involving multiple officers while serving a search warrant at a home in Crawford County, Ga., on Dec. 12, 2016. (Woody Marshall/The Macon Telegraph via AP)
Crime and Incidents

Georgia Bureau of Investigation Special Agent in Charge J.T. Ricketson said a multi-jurisdiction drug task force went around 2:30 a.m. Monday to a home on state Highway 42. Byron officers knocked on the door and announced themselves, but no one answered.

“They knocked on the back door and announced their presence and that they were performing a search warrant,” Ricketson said.

The officers returned fire, and the suspect was killed, he said.

“These officers returned fire after they were fired upon. I don’t know how many rounds they fired. We will be determining that,” he said. “One subject was struck and he is actually deceased.”

The two officers, who both work at the Byron police department, were taken to a hospital in Macon, he said. One was treated and released and the other was in surgery Monday morning, Ricketson said. He described the injuries as “serious but not life threatening.”

Ricketson described the suspect who was killed as a 35-year-old white man, who is believed to have been the subject of the search warrant. The man’s girlfriend and an infant about one month old were also in the house at the time of the shooting but neither was harmed, he said.

GBI agents have locked down the scene and were securing search warrants. The names of the suspect and the officers were not released.

Ricketson said the officers are part of the Peach County Drug Task Force that includes officers from Peach and Crawford Counties, Byron and Fort Valley.

Most recently, two police officers were shot responding to a domestic dispute call at an apartment in rural Americus last weekend. Americus Officer Nicholas Smarr died Wednesday and fellow officer and lifelong friend Jody Smith died the following day. The suspected gunman was found later—apparently of a self-inflicted gunshot wound—inside a home where he was hiding.