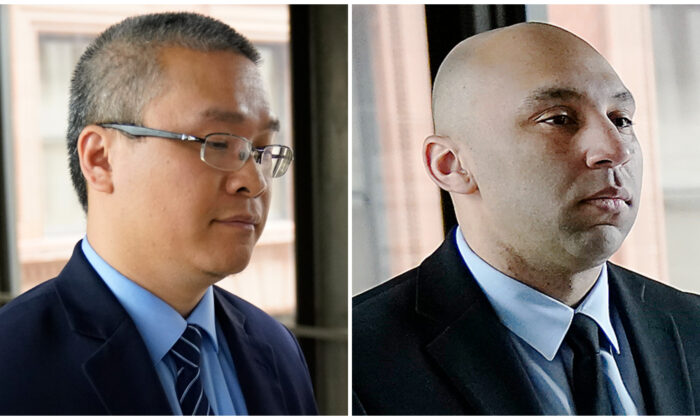 MINNEAPOLIS—Two former Minneapolis police officers charged in George Floyd’s killing told a judge Monday that they have rejected plea deals that would have resulted in three-year sentences, setting the stage for trial in October.

Tou Thao and J. Alexander Kueng are charged with aiding and abetting both second-degree murder and second-degree manslaughter in Floyd’s death. They and Thomas Lane were working with Derek Chauvin when Floyd died.

Chauvin was convicted of second-degree murder last year and sentenced to 22.5 years on the state charge.

Hennepin County Judge Peter Cahill had set a limited window for accepting a plea deal ahead of trial, and Monday’s brief hearing served to formalize the two ex-officers’ rejections of the state’s offers.

“It would be lying for me to accept any plea offer,” said Thou, who held back concerned bystanders as Chauvin pinned Floyd. Kueng did not give his reasons for rejecting the state’s offer.

In rejecting the plea agreements, Thao and Keung are risking state sentences that could be significantly longer than their federal sentences if they’re convicted on both counts. Assistant Attorney General Matt Frank pointed out in the hearing that the state’s sentencing guidelines recommend sentences of 12.5 years on the murder count and 4 years on the manslaughter count, but that prosecutors have already said they’ll seek longer sentences if they get convictions.

In Minnesota, assuming good behavior, defendants typically serve two-thirds of their sentences in prison and one-third on parole.

Frank said plea negotiations began in earnest in May and continued into June. The offers would have dropped the most serious charge of aiding and abetting murder, and the officers’ state time would have run concurrently with the federal sentences. Both defendants confirmed that they understood that the state has now withdrawn its offers.

“It’s a standard best practice to make a record in court when the State offers a plea agreement, in order to ensure the defendant’s decision is freely and knowingly made,” Attorney General Keith Ellison said in a statement afterward. “The defendants have a right to decline the offer and proceed to trial. The state is ready for trial.”

During the hearing, Kueng’s attorney, Thomas Plunkett, said that Ellison at one, unspecified point in the negotiations, offered Kueng a deal that would have resulted in 2 years in prison. Kueng confirmed that Plunkett had told him about the offer, and that they rejected it. Frank did not comment about the purported offer.

Thao’s attorney, Robert Paule, said that they, at an unspecified point, proposed a deal for 2 years, but that the state rejected it. Frank said that wasn’t how he recalled the discussions, and that his recollection was that Thao’s offer had included dropping the charges. Neither side elaborated on the discrepancies.

The trial is scheduled to begin Oct. 24, with opening statements Nov. 7.

Lane avoided a state trial by pleading guilty in May to aiding and abetting second-degree manslaughter in a deal that calls for a three-year sentence. His sentencing is Sept. 21.

Chauvin was sentenced to 21 years on the federal civil rights charge. He remains in the state’s maximum security prison at Oak Park Heights pending his transfer to federal prison. The other three remain free on bail.