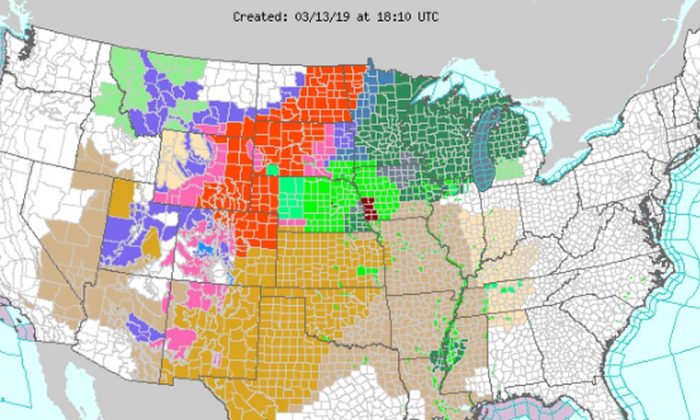 A late-winter storm system is forecast to affect much of the central United States starting on March 13, with some describing it as a “bomb cyclone.” (NWS)
US News

On March 14, the National Weather Service (NWS) said the “strong winter storm to continue to affect portions of the Central to Northern Plains today with Blizzard conditions continuing.”

But it added that winds will be “diminishing across the Southern and Central Plains as the storm pulls away from these regions.”

This is why I-25 is closed between Colorado Springs and Castle Rock. @KRDONC13 pic.twitter.com/aBzodQyt85

According to the NWS, the storm affected “the mid section of the nation” and “has been responsible for heavy snows, blizzard conditions, and widespread wind gusts over hurricane force will be pressing northeastward through the Upper Mississippi Valley into the Upper Great Lakes on Thursday.”

It said the storm should weaken over the coming days.

“Blizzard conditions are expected to continue into the first half of Thursday over northeast Colorado and for most of the day from eastern Wyoming, across most of Nebraska, South Dakota, eastern North Dakota into northwest Minnesota,” the agency warned.

The #StateofCO @USNationalGuard has been working throughout the night to rescue stranded motorists in Arapahoe, Douglas, Elbert, and El Paso counties. We checked 129 vehicles and rescued 36 people overnight, transporting them to shelters. @GovofCO @LtGovofCO @COEmergency

Travel will remain life-threatening in those areas.

However, conditions will begin to improve on the night of March 14 and into March 15.

A Great Plains cyclone of historic proportions is now underway across the central U.S. Here’s the latest… pic.twitter.com/CLAsDmmOkZ

“It dropped 23 millibars in 24 hours—that is a ‘bombgenesis’ my friends. A big deal,” she said.

“This is a very epic cyclone,” said Greg Carbin, head of forecast operations for the National Oceanic and Atmospheric Administration’s Weather Prediction Center, reported Fox. “We’re looking at something that will go down in the history books.”

The Weather Channel reported that at least two people have died in the storm, including a police officer.

The Colorado National Guard said it was asked to help more than 1,000 stranded motorists on highways in the state.

A Colorado Springs woman who became stuck in her car for two hours with her mother, brother, and sister as they were trying to return home from a doctor’s appointment, according to The Associated Press.

INTENSE, dangerous #blizzard conditions with #BombCyclone! Here is I80 at Kimball NE. Everything is closed of course. Pure whiteout. Winds gusting over 70 mph @breakingweather @accuweather pic.twitter.com/tN5NgcYf43

Bria McKenzie says the snow was so blinding and numbing, and the wind was whipping so hard, that she didn’t feel safe to walk to a hospital a short distance from where they were stranded Wednesday afternoon.

The 22-year-old McKenzie says other cars also became stuck on the hilly road, until the line of vehicles disappeared from view into the blizzard.

McKenzie said that they were eventually rescued by her father in his pickup truck, and it took him another 20 minutes to drive to their home less than a mile away.

According to the Weather Channel, hundreds of miles of roads were closed in Colorado, Kansas, Wyoming, Nebraska, South Dakota, and North Dakota.