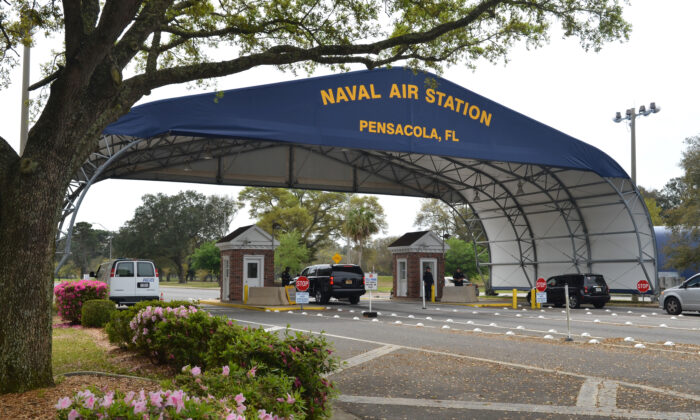 The main gate at Naval Air Station Pensacola is seen on Navy Boulevard in Pensacola, Fla., on March 16, 2016. (U.S. Navy/Patrick Nichols/Handout via Reuters)
US News

The sheriff’s office in Escambia County said the shooting is over, CNN reported. The gunman has been confirmed dead. Three other people were killed.

Two sheriff’s deputies were injured, one shot in the arm, the other in the knee, but both were expected to survive, officials said at the news conference.

Authorities told WEAR-TV that the gunman was shot and killed by authorities at the base.

The base’s Facebook page sent out an alert on the active shooter on Friday morning.

“Both gates of NASP are currently secured due to reports of an active shooter. More information will be provided as it becomes available,” the post read.

President Donald Trump had been briefed and was monitoring the situation, a White House spokesman said.

Rep. Matt Gaetz (R-Fla.), whose district includes Pensacola, tweeted: “Please pray for our military service members, law enforcement, and other first responders as they work to address the situation.”

My staff and I are closely monitoring reports of a shooting at Naval Air Station Pensacola. The shooter is now dead.

Please pray for our military service members, law enforcement, and other first responders as they work to address the situation.

According to the Navy’s website, Naval Air Station Pensacola employs more than 16,000 military and 7,400 civilian personnel. Meanwhile, a number of families live at the base.

The lockdown in Pensacola comes just a few days after a sailor killed two civilian employees before turning a gun on himself at Pearl Harbor Naval Shipyard in Hawaii.