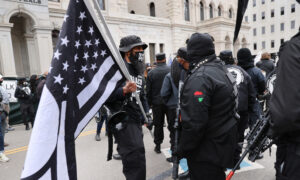 The Washington County Sheriff’s Office said it responded to a 911 call at about 2:50 p.m. to reports that a person had forced his way into the caller’s residence located at the 8100 block of Forest View Road in the town of Kewaskum, and demanded the keys to a vehicle.

About six minutes later, a neighbor rang emergency services saying they heard gunshots, and saw an individual approaching the residence.

The armed individual shot a resident of the home before police arrived, according to the sheriff’s office. The body was found outside the initial caller’s home, authorities said.

Sheriff’s deputies arrived and “there was an exchange of gunfire with the armed suspect,” the office said. The armed man then fled the scene on foot.

After closing off roads nearby and carrying out a search, authorities located the suspect with a drone a short distance away. Deputies found the man dead from an apparent gunshot wound, and in possession of a firearm that was located near his body.

The identities of the armed man and the resident weren’t revealed. It is not yet clear whether they knew each other.

“While there is no longer a threat to the community, roadways in the immediate area will remained closed to facilitate the ongoing investigation,” deputies said in a statement. “As such, motorists are requested to avoid the area. The Washington County Sheriff’s Office is investigating the death of the local resident. The Wisconsin Department of Justice Division of Criminal Investigation has also been requested by the sheriff’s office to investigate law enforcement’s shooting of the suspect.”