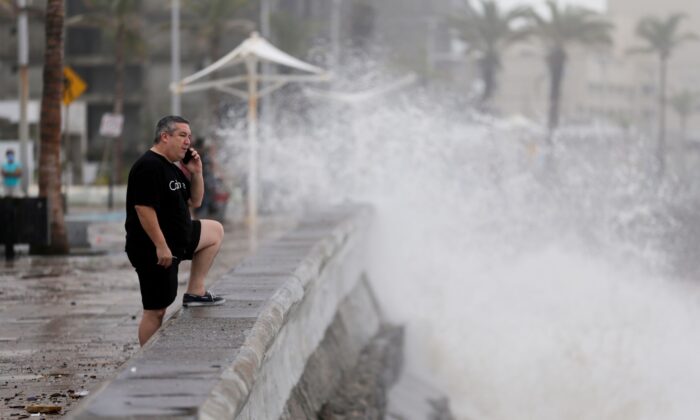 A man speaks on his mobile phone as hurricane Pamela pounds the Pacific coast resort with strong winds as it makes landfall in Mazatlan, Mexico, on Oct. 13, 2021. (Daniel Becerril/Reuters)
US News

ST. HEDWIG, Texas—A flash flood from the remnants of Hurricane Pamela swept a woman and a young girl to their deaths in a Texas creek as they were heading to a school and officials worked Friday to recover the woman’s body, authorities said.

The 52-year-old woman and a 5-year-old girl died when the separate vehicles they were in were swept from a bridge Thursday morning into the flood-swollen Martinez Creek in St. Hedwig on the outskirts of San Antonio, according to Bexar County Sheriff Javier Salazar.

“There’s nothing more heartbreaking than to see the body of a 5-year-old pulled out of a car,” an emotional Salazar said. “She was still wearing her backpack … it just doesn’t get any worse than that.”

A diver confirmed the woman’s body was in the vehicle, but the vehicle moved into deeper water in the rapid current and was more than 10 feet underwater, according to Salazar.

Emergency officials returned to the creek Friday and planned to remove the vehicle containing the woman’s body.

Four other children and a man were rescued from the two vehicles that were headed to a nearby elementary school, Salazar said. The seven were part of the same family, he said, but he did not elaborate and no names have been released.

The heavy rains from Pamela’s remnants deluged San Antonio, which is prone to flash flooding. Pamela made landfall on Mexico’s Pacific coast early Wednesday and moved inland into central Texas and southeastern Oklahoma.