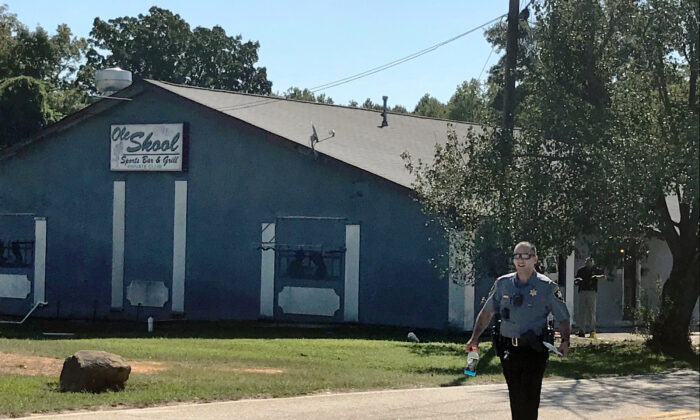 A Lancaster County Sheriff's deputy walks around the Old Skool Sports Bar and Grill, the scene of a shooting early in the morning, north of Lancaster, S.C. on Sept. 21, 2019. (Jessica Holdman/The Post And Courier via AP)
Crime and Incidents

Two men died at a night club in South Carolina as a result of a shooting where at least eight others were also shot.

The incident occurred at about 2:45 a.m. in the Twin Pines area at Old Skool Sports Bar & Grill. Four of the victims were taken to different medical facilities by air for treatment, reported Fox46 Charlotte.

Their present condition has not been specified.

The gunshots came from both inside and outside the heavily populated bar. Police responded and arrived at the scene while many people were fleeing the scene. They are still working to verify the number of shooters.

The Lancaster News reported that a person was injured in a fall as people were fleeing, the identities of the 11 victims have not been revealed.

Police are still trying to find more witnesses, and although they have leads, officers are urging that anyone with information to come forward.

No one has been arrested yet, according to the release.

“This was a violent incident of huge magnitude that was witnessed by lots of people,” Lancaster County Sheriff Barry Faile said. “Two people are dead, and many more are seriously injured. The shooter or shooters are out there. We need to talk with everybody who was at the club when the shooting happened, and I encourage those witnesses to contact us immediately so those responsible for these deaths and injuries can be taken into custody.”