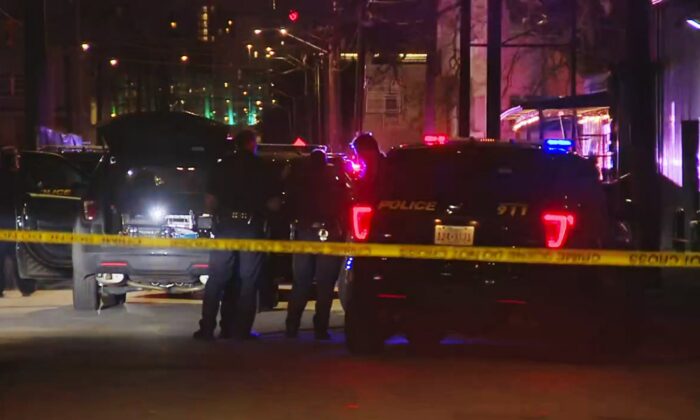 San Antonio police officers in a file photo at the scene of a deadly shooting in San Antonio, Texas. (KSAT via AP)
US News

Two people were killed and five injured after a person opened fire inside a club in San Antonio, Texas, on Sunday night, according to local authorities.

San Antonio Police Chief William McManus said in a Sunday night press conference that there appeared to have been an altercation inside the club before gunshots were reported. Five other people were injured.

The suspect in the shooting is still at large, officials told local news outlets.

WATCH: Chief McManus provides media preliminary information on shooting with multiple victims on the 1000 block of Avenue B. ➡️➡️ https://t.co/iIiYcTDXqb

At least one of the victims was identified, with family telling KENS5 that 25-year-old Alejandro “Alex” Robles died in the incident. The family said his girlfriend, Brittany, was injured.

McManus noted that it still isn’t clear whether the shooting was targeted or random.

McManus added that he believes a suspect will be identified and taken into custody in the near future.

“I’m confident that we will identify the individual and have that person in custody sooner than later,” he told reporters. He said five people are at local hospitals.

The incident, he added, “is nothing more complicated than [an] argument that occurred inside the club with someone pulling out a firearm.”

All the victims appear to be bar patrons and no employees were shot, the chief said. The ages of the victims are not clear, he added to reporters.

McManus said that an investigation into the matter has not been completed, noting that some details may be subject to change.

No further information about the shooting was immediately available.