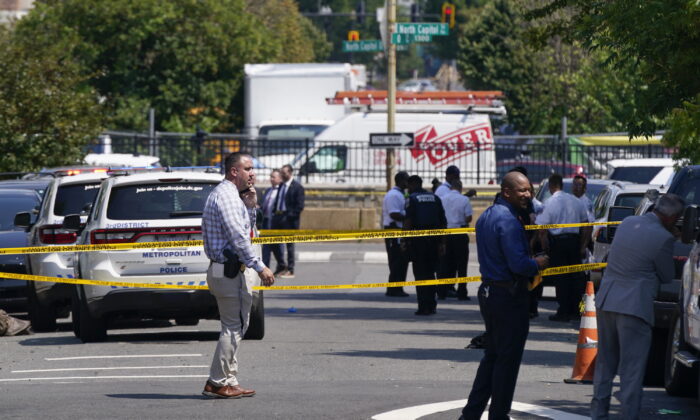 Law enforcement officials gather at the scene of a shooting in northwest Washington on Aug. 24, 2022. (Patrick Semansky/AP Photo)
Crime and Incidents

2 Dead, 3 Hurt in Shooting in Front of DC Senior Residence

WASHINGTON—Police said two people were killed and three others injured Wednesday in a shooting in front of a senior citizens center and near several schools in the nation’s capital.

The Metropolitan Police Department said Wednesday’s shooting happened in the Truxton Circle neighborhood of Washington in front of a residence for senior citizens and near several high schools.

The shooting happened just before 1 p.m. when a black SUV pulled up in front of the senior residence and two men hopped out and opened fire, Executive Assistant Police Chief Ashan Benedict said. The men fired at least seven shots before returning to their vehicle and driving away.

A total of five men were shot. Two died at the scene and three others were taken to area hospitals and were being treated Wednesday afternoon for their injuries.

Benedict said police were still trying to collect evidence at the scene and working to identify a definitive motive, but he said the area is known to officers as “an open-air drug market.”

Officers routinely make arrests there for the sale of narcotics, and investigators believe the shooting was related to those drug sales, he said.

“This is an ongoing problem,” Benedict said.