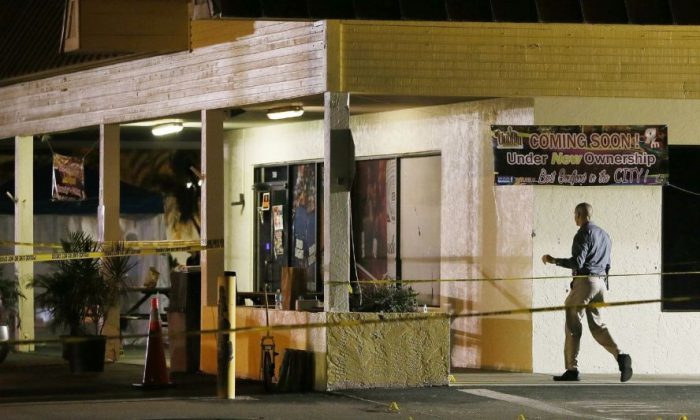 An investigator walks near the scene of a fatal shooting at Club Blu nightclub in Fort Myers, Fla., Monday, July 25, 2016. (Kinfay Moroti/The News-Press via AP)
Crime and Incidents

Police say not an act of terrorism
By Jack Phillips

At least two people were killed and at least 20 people were injured in a nightclub parking lot shooting at Fort Myers, Florida, according to local media reports.

The shooting occurred at 12:30 a.m. local time at Club Blu. Victims as young as 12 years old were hospitalized. One person died at the hospital, WINK News reported. At least three people are currently in custody, police said.

The two killed were Sean Archilles, 14, and Stef’an Strawder, 18.

The City of Fort Myers, in an update on Monday morning, said the area around the Club Blu “is deemed safe at this time.”

In a Facebook post, the nightclub said it “tried to give the teens what we thought was a safe place to have a good time,” adding that teens between the ages of 12 and 17 attended. “There was armed security as well as full security, inside and out. As the club was closing and parents were picking their children up … that’s when all this took place.”

“There was nothing more we could of done [as] you see it was not kids at the party that did this despicable act. Our condolences to all parties involved,” Club Blu stated.

Fort Myers Police said the shooting is not terror-related.

Gov. Rick Scott said he is heading to Fort Myers and is offering any assistance needed from the state level.

“I have cancelled my scheduled events today to meet with law enforcement and local officials in Ft. Myers,” the governor said in the statement. “While we are still learning the details about what happened this morning, we know that some of the victims of this terrible incident were children. We will continue to pray for the victims and their families.”

One woman who lives near the club described the incident on Facebook, saying that she heard about 30 shots from several guns. “It was unbelievable,” she said, adding that when she arrived, people were crying and screaming as ambulances arrived.

A woman told the News-Press that an acquaintance, Sean Archilles, was shot and killed.

“My cousin called and said Sean is dead,” Adline Azemard said. “We were at Lee Memorial all night, and they don’t tell us nothing. They have a party for the kids.” She added, “They should had [sic] security.”

Azemard, who had worked at the club for adult events, said, “I didn’t know they had kid parties.”

The club was holding a “Swimsuit Glow Party” event for teens, according to a poster on its Facebook feed.

Anyone with information regarding the case is urged to contact the Fort Meyers Police Department on 321-7700. Or call Crime Stoppers at 1-800-780-TIPS.

The Fort Myers Police Department has learned that a few of the victims who had sustained minor injuries left the hospital before speaking to police, the department said in a statement.

“It is imperative that all persons who were involved with this incident, come forward so that this incident can be properly documented and statements obtained from all involved.”