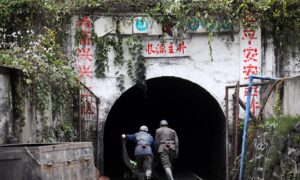 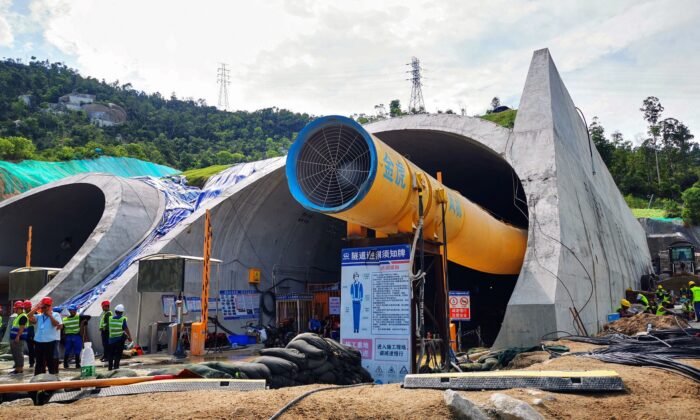 Rescuers work to clear a flooded tunnel after 14 construction workers were trapped in an underground section of a new highway construction site after it collapsed in Zhuhai in China's southern Guangdong province on July 16, 2021. (STR/AFP via Getty Images)
China

BEIJING—Two of 14 workers who had been trapped in a flooded highway tunnel for five days, so far, in the southern Chinese city of Zhuhai were found dead, the city government said on Monday.

Early on July 15, water suddenly leaked into the Shijingshan tunnel, which is being built under a reservoir, trapping the workers more than a kilometre from the entrance.

On the afternoon of July 19, rescuers found the two dead workers at about 1,159 yards and 1,170 yards from the tunnel’s entrance, the Zhuhai government said on its official WeChat account.

As of 9:00 a.m. on July 19, rescuers were approximately 802 yards into the tunnel, but were still 467 yards from where the workers were trapped, the official Xinhua news agency said.

The vast tunnel, while still under water, had seen its overall water level drop by a total of 15.5 metres by then, Xinhua said.

Divers have been conducting searches for a total of 16 hours, it added.

The accident was the second in the tunnel since March, when a collapsed wall killed two workers.

The tunnel is part of a major expressway in Zhuhai in Guangdong province, linking the coastal city to a bridge to neighbouring Macau and Hong Kong.