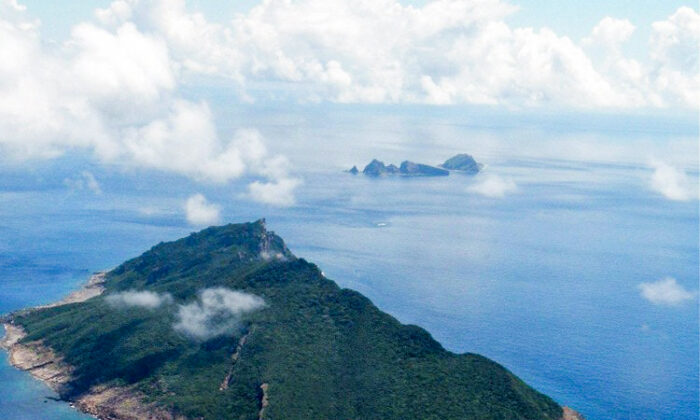 The Senkaku Islands in the East China Sea are pictured in this photo taken on Sept. 15, 2010. (Jiji Press/AFP/Getty Images)
Asia & Pacific

Two Haijing ships entered the area off the Senkaku Islands on June 18 and shadowed a Japanese fishing boat sailing in the area. The Chinese vessels departed from the area at about 11:25 a.m. local time on June 19, The Japan Times reported.

Japan also lodged a protest against Beijing’s “unilateral development activities” in the East China Sea on June 17, after its navy detected that China was laying the groundwork for a new structure in the disputed waters.

In a statement, Japan’s Foreign Ministry said China had built a total of 17 structures for resource development west of the geographical middle line between Japan and China in the East China Sea.

“It is extremely regrettable that the Chinese side is proceeding with unilateral development activities, albeit on the west side of the Japan–China intermediate line, in a situation where the boundaries have not yet been defined,” the statement reads.

Japan’s move comes after the United States reaffirmed its backing of the Philippines in calling on China “to end its provocative actions and to respect international law in the South China Sea.”

The Philippines lodged a diplomatic protest against China on June 9 over the “illegal” presence of over 100 Chinese vessels “in and around” Whitsun Reef, which Manila refers to as Julian Felipe Reef, in April.

“These actions are part of a broader trend of [the People’s Republic of China] provocations against South China Sea claimants and other states lawfully operating in the region,” the Philippines State Department stated.

China has built up its military presence in the South China Sea and made numerous incursions into the East China Sea, where the Senkaku Islands are located.

Japan has mostly controlled the Senkaku Islands since 1895, but Beijing began asserting its right over the islands in the 1970s and called them the Diaoyu Islands.

On June 13, Japan deployed an escort flotilla of its Maritime Self Defense Force (JMSDF) to the Indo-Pacific for a four-month naval exercise to demonstrate its strong opposition to “any attempt to unilaterally change the status by force” in the region.