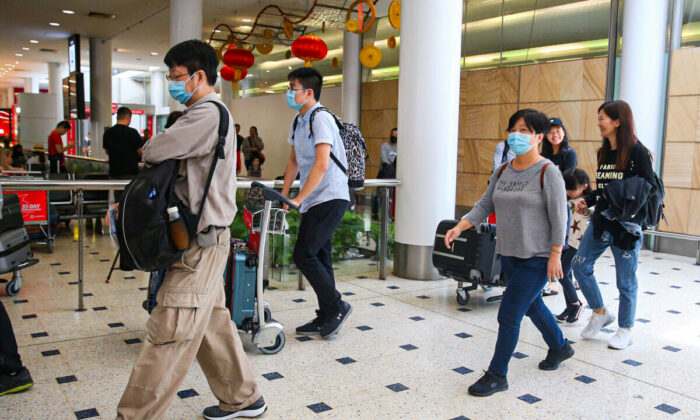 2 Chinese Students Barred From Entering Australia Over Prior ‘Military Training’

Two Chinese international students have been refused entry by Australian border officials for not disclosing their prior military training, according to Beijing state media.

An international student entering Sydney International Airport had his visa canceled and wasn’t allowed to enter Australia after border officials found that he had received military training at a Chinese university, according to the Chinese state-run media outlet China Daily.

A second student entering Sydney went through manual check-in before being questioned by the Australian Border Force (ABF), who then searched his luggage and electronic devices.

“The Australian side found on his mobile phone some photos of military training during his university studies in China and refused entry on the grounds that he had concealed his so-called ‘military training’ experience and notified him on the spot that his visa was canceled, and he was deported,” the China Daily report reads.

The Chinese Ministry of Foreign Affairs and its Australian-based embassy have made “representations” to the federal government over the incident while pushing for a halt to the investigation and the repatriation of the students.

“The traveling public should be aware that the ABF can and does cancel visas at the border if a traveler has provided false information,” a spokesperson told The Epoch Times. “We are committed to facilitating the entry of legitimate visa holders into Australia, but will not hesitate to use the powers we have to protect Australia’s national interests when required.”

Several of the recommendations targeted the issue of “talent recruitment,” which has seen the Chinese Communist Party (CCP) invest millions into hiring and engaging top-level university talent around the world to prop up its own research sector—often linked to military development.

The Australian Strategic Policy Institute identified in January 2021 325 academics and scientists across the university sector who were alleged to be recruits of controversial talent recruitment programs such as the Thousand Talents program.

“Recruits are encouraged to transfer technology to China and commercialise it, including technologies with military and security applications,” China analyst Alex Joske wrote in a parliamentary submission (pdf). “Cases such as that of a Thousand Talents Plan scholar and former University of Queensland professor providing AI-enabled surveillance technology to authorities in Xinjiang highlight the human rights implications of such technology transfer.”

On March 15, New Zealand’s (NZ) domestic security service revealed that it thwarted an attempt by a “foreign state” to steal sensitive technology.

“We disrupted an NZ-based individual who was trying to facilitate the transfer of sensitive NZ-based technology to a foreign state. The technology would have highly likely supported that state’s military capability,” said Rebecca Kitteridge, director-general of the Security Intelligence Service (SIS).

NZ universities and businesses have faced questions over their connections to Chinese institutions that are linked to the People’s Liberation Army and the sharing of technology that could be repurposed for military use.

The company’s flagship drone cargo plane model (the P-750-XSTOL) was subsequently adopted and flown in China under a different moniker (the AT-200) while adapted for military use, specifically for “counter-insurgency and light attack.”

Democratic nations have wised up in recent years to the risks of playing a part in Beijing’s military-civil fusion strategy, through which the CCP harnesses research and technology developed by civilian organizations.