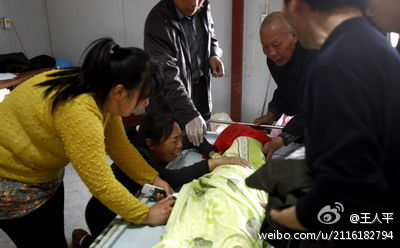 Distraught relatives at the bedside of one of two girls who died, after a principal from a rival kindergarten sought to poison some of the students at their school. (Weibo.com)
China

A kindergarten principal in Hebei Province sought to discredit another kindergarten owner with more students by poisoning some of the children. Two were killed, according to state mouthpiece Xinhua.

The woman apparently hired a man to leave bags containing bottles of yoghurt injected with rat poison on the roadside near the Two Rivers Nursery Center in Lianghe village. On April 24 a grandmother took home one of the bags, and the two girls in her care, aged 5 and 6, later drank the yoghurt, Hebei Youth Daily reported.

The grandmother, Ren Shuting, told the Daily: “I took the girls to the Two Rivers Nursery Center in the village. I picked up a bag containing notebooks and yoghurt when we were close to the school, then I took it home and put it aside.”

When the girls got back, Ren said they found the yoghurt and drank it. “They asked me then, ‘Grandma, why is this yoghurt so bitter?’”

Ren tasted the yoghurt herself. While the girls were playing, they both began convulsing and foaming at the mouth. Ren shouted for help from neighbors, who called emergency services. One girl died on the way to hospital, and the other died in hospital on May 1. Ren also had to be hospitalized.

Both the kindergarten owner and the man she hired have been arrested, and have reportedly confessed to the crime.

A local netizen called Mr. Liu from Pingshan County told The Epoch Times that a lot of people in China are discussing this issue at the moment, and think the principal is heartless.

“There are two kindergartens in Lianghe Village; one has over 200 students and the other has around 100. The owner of the kindergarten with fewer students came up with this poisoning scheme because she is jealous that the other owner has more students,” Mr. Liu said. “Her surname is Shi, she is in her thirties.”

“Because of the one-child policy, every family basically has only one child. The victims’ family haven’t dared tell the grandfather as they are afraid he will be so angry it could kill him.”

A netizen from Henan Province commented on Weibo: “The government has forced the people nowadays to care about nothing but money.“

An Internet user from Zhejiang Province said: “People without faith and morality will dare to do anything.”