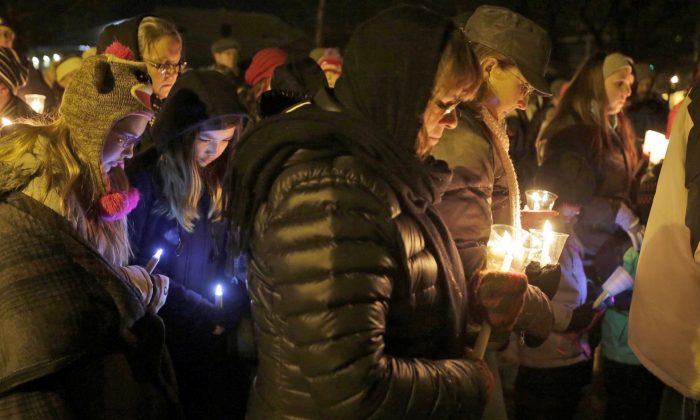 2 Children Who Died Saving Others Among 21 Carnegie Heroes

PITTSBURGH—Two children who died saving the lives of even younger children are among 21 people being honored with Carnegie medals for heroism.

The Carnegie Hero Fund Commission, based in Pittsburgh, announced the winners Tuesday.

Natalie Renee Martin, 11, of Sheboygan Falls, Wisconsin, led her 9-year-old sister, Jenna, to safety when their house burned on Jan. 26. Natalie went back into the house attempting to rescue two other siblings, 10-year-old Benjamin Martin and 7-year-old Carter Maki, but all three were trapped and died later of complications from smoke inhalation.

Kiera Vera Larsen, 10, was killed Feb. 22 when she pushed 2-year-old Emmah Gusich out of the way when a parked vehicle began rolling down a sloped driveway toward the toddler in El Cajon, California. Kiera was struck and killed by the vehicle.

The commission is named for the late steel magnate and philanthropist Andrew Carnegie, who was inspired by stories of heroism during a coal mine disaster that killed 181 people, including a miner and an engineer who died trying to rescue others.

The commission investigates stories of heroism and awards medals and cash several times a year. It has given away $38.7 million to 9,914 awardees or their families since 1904.

Other winners announced Tuesday, with rescues taking place in the hometown of each winner unless otherwise noted:

— Ryan R. Rollinger, 39, of Harrisburg, South Dakota, was an assistant principal who saved his principal from further harm after the principal was wounded by a 16-year-old student with a gun at school in September 2015.

— William E. Ramirez, 46, of Pembroke Pines, Florida, who saved a Miami police officer from assault when the driver of a taxi pulled over by the officer opened fire in April 2015.

— Nathan Ryan Reynolds, 35, of Claremont, California, who saved a 75-year-old woman and 9-year-old girl from a car that crashed into a pond in Marina, California, in January 2015.

— R. Wayne Trivette, 67, of Metamora, Ohio, and Timothy A. Holtz II, 35, of Sand Creek, Michigan, who saved an unconscious woman from a burning vehicle after a crash in Jasper, Michigan, in July 2015.

— Clark Whitecalf, 41, of Gallivan, Saskatchewan, who rescued a sleeping woman from a burning house in August 2015.

— Cody Fields, 24, of Silver Spring, Maryland, and Brian Nesbitt, 35, of Germantown, Maryland, who rescued an unconscious man from a burning car in Silver Spring in September 2015.

— Shei’Londa S. Brooks, 25, of Houston, who helped rescue a man from a crashed, burning vehicle in February.

— Lori Doppelheuer Kearney, 35, of Maysville, Kentucky, who died in an unsuccessful attempt to rescue her three sons when their house burned in October 2015.

— Ivan R. Romero Jr., 39, of Antelope, California, who saved a woman from a burning car hit by a tanker truck in West Sacramento, California, in July 2015.

— Dennis D. Swenson, 67, of Cornucopia, Wisconsin, who died unsuccessfully trying to rescue his 95-year-old mother, Dorothy, when their house burned in May 2015.

— Calvin Bradley Stein, 51, of Madoc, Ontario, who saved a 3-year-old girl from being trampled by runaway ponies at a fairground in Tweed, Ontario, in July.

— Damian Bell, 35, of Pleasant Hill, Iowa, who helped save a man who fell into an icy pond in Indianola, Iowa, in February.

— Joseph Kolanchick, 51, of Albany, New York, who saved a man who fell through the ice at Collins Lake in Scotia, New York, while skating in February 2016.

— Joshua Gary Grimmett, 33, of Boise, Idaho, who saved an injured woman from drowning in Mores Creek in May.

— Robert M. Shaw Jr., 54, of Wallingford, Connecticut, who saved a man from a burning tanker truck in Meriden, Connecticut, in July 2015.