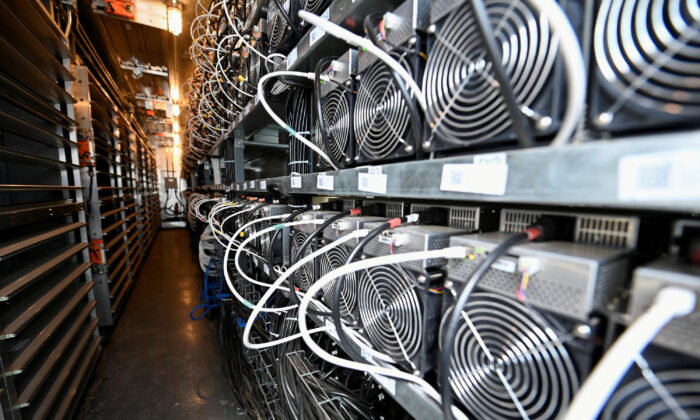 A bank of cryptocurrency miners operates at the Scrubgrass Plant in Kennerdale, Pennsylvania, on March 8, 2022. (Alan Freed/Reuters)
Crime and Incidents

Two Europeans were charged on Monday for allegedly conspiring with an American cryptocurrency expert, who has already been convicted, to teach members of the North Korean regime to use blockchain technology to evade U.S. sanctions.

Alejandro Cao de Benos, a Spanish citizen, and Christopher Emms from Britain are accused of illegally organizing the Pyongyang Blockchain and Cryptocurrency Conference in 2019. They recruited U.S. citizen Virgil Griffith to give talks at the conference.

Griffith pleaded guilty last year to one count of conspiracy to violate international sanctions. He was sentenced to 63 months in prison and fined $100,000 on April 12.

“In his own sales pitch, Emms allegedly advised North Korean officials that cryptocurrency technology made it ‘possible to transfer money across any country in the world regardless of what sanctions or any penalties that are put on any country’,” Williams said.

“The sanctions imposed against North Korea are critical in protecting the security interests of Americans, and we continue to aggressively enforce them with our law enforcement partners both here and abroad,” he added.

According to the indictment, Cao de Benos founded a pro-North Korea affinity organization—namely the Korean Friendship Association—and partnered with cryptocurrency businessman Emms in 2018 to organize the Pyongyang cryptocurrency conference.

They arranged Griffith’s travel to North Korea for the conference in April 2019, during which Emms allegedly told Griffith that he had “obtained rare full permission [from the North Korean authorities] for U.S. citizens to enter the country.”

During the conference, Emms and Griffith allegedly taught attendees about blockchain technologies and proposed plans to create specialized “smart contracts” to serve the unique interests of the North Korean regime.

The three defendants intended to conduct a second cryptocurrency conference in Pyongyang in 2020, but their plans were thwarted when U.S. authorities arrested Griffith in November 2019.

The indictment states that Cao de Benos warned Griffith in an email about the legal repercussions he might face in the United States, after learning that Griffith had spoken with the U.S. Embassy in June 2019 about his travel to North Korea.

“They could fine or even jail you! That’s why we never said to anyone or made public the attendants,” he wrote in the email. “Please understand that your permission to enter [North Korea] was absolutely exceptional and through my very personal guarantee (Because I trust Chris and he trusts you).”

Both Cao de Benos and Emms are charged with one count of conspiring to violate and evade U.S. sanctions, which carries a maximum penalty of 20 years in prison.