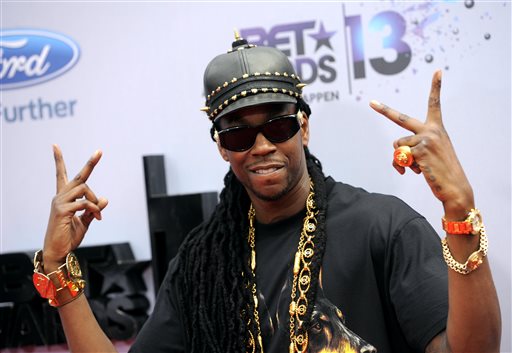 2 Chainz arrives at the BET Awards at the Nokia Theatre on Sunday, June 30, 2013, in Los Angeles. (Photo by Chris Pizzello/Invision/AP)
Entertainment

Rapper 2 Chainz’s tour bus was pulled over on Thursday for drugs in Oklahoma City, it was reported.

News on 6 reported that the rapper, who performed Wednesday with Lil Wayne and T.I., was among 11 people arrested.

An officer pulled the bus over, suspecting there were drugs on board. When the officer tried to search it, the driver locked the doors, leading to a standoff.

The tour bus was then towed with people on board.

After it was towed, officers then got a warrant to search the vehicle.

TMZ reported that officers pulled the bus over early in the morning.

However, police did not say if they found any drugs on the bus.

The 11 people were charged with obstruction.