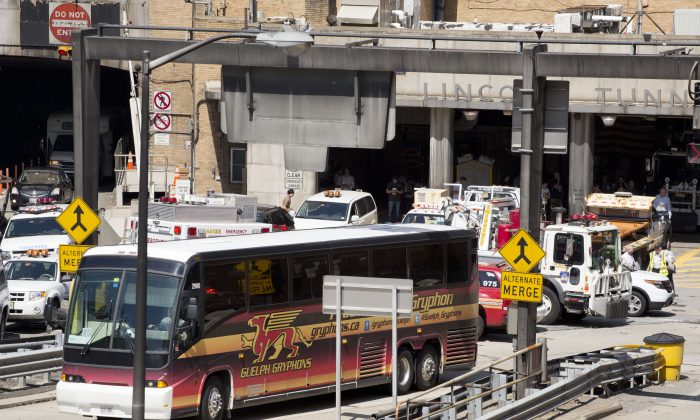 A private bus that had been carrying Canadian school children drives out of the Lincoln Tunnel, Wednesday, June 10, 2015 in New York. (AP Photo/Mark Lennihan)
Crime and Incidents

The crash happened at around 9:30 a.m. in the center tube on the New York side of the tunnel connecting it with New Jersey, said Joe Pentangelo, spokesman for the Port Authority of New York and New Jersey police, which operates the tunnel.

None of the 26 students and two adults from the Toronto school was hurt, according to Anna Caputo, spokeswoman for the Toronto District School Board. The group was heading to New York for a graduation trip, she said.

As for the transit bus, Pentangelo said 35 to 40 people were hurt, and the 4 most severely injured had neck and back injuries. The Fire Department of New York said 31 people were taken to hospitals with injuries that weren’t considered life-threatening.

A 32-year-old woman went into labor while stuck in the tunnel and was taken to a hospital.

There were approximately 60 riders on the NJ Transit bus heading from Cresskill, New Jersey, to the Port Authority Bus Terminal, the transit agency said. At least two people were taken out of the tunnel on stretchers and two others walked out with the help of emergency personnel. People with bloody noses were being treated at a triage station set up outside the tunnel.

Jaehoon Chung, a carpenter who was going to work on the NJ Transit bus, said the impact of the crash felt like a minor collision.

He said the passengers were stuck on the bus for 10 to 20 minutes because the door was damaged.

“We couldn’t get out. The door was bent,” he said. “Everyone was calm. We all waited until a cop came.”

The NJ Transit but was eventually towed out of the tunnel. The Toronto bus was driven out.

The crash caused delays of up to one hour heading into New York. The two lanes of the center tube in the tunnel reopened before noon.

Pentangelo said traffic was back to normal by the afternoon rush.

The Port Authority said 42 million vehicles a year travel through the tunnel. The the tunnel has three tubes built beneath the Hudson River.