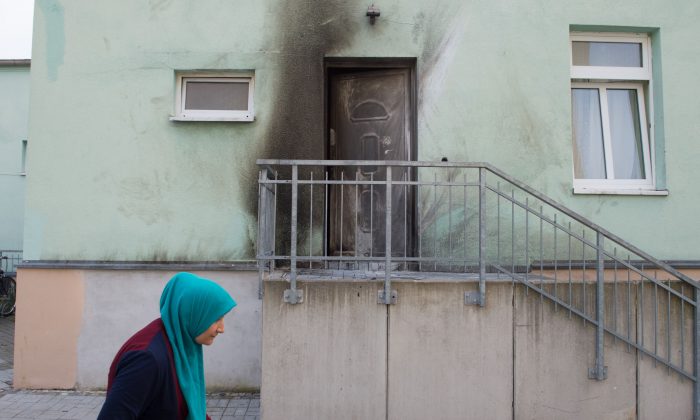 A woman walks in front of the entrance of the Fatih Camii mosque in Dresden, Germany on Sept. 27, 2016. (Sebastian Kahnert/dpa via AP)
International

BERLIN—Two homemade explosive devices were set off outside a mosque and a conference center in the eastern German city of Dresden, police said Tuesday. Nobody was hurt.

Dresden police said in a statement that there was no immediate report on the extent of damage from the explosions late Monday.

“Even though we do not have a letter of confession, we must assume there’s a xenophobic background,” Police President Horst Kretschmar said.

“Aggression against people who are practicing Islam is increasing in Germany,” he said. “Fortunately, people didn’t get hurt, but we don’t want these things to happen in Germany.”

Police said they found pieces of the devices in front of the buildings.

An imam with his wife and two sons were inside the mosque at the time. They were not injured, but the entrance door was forced into the building by the blast. Police said they increased security outside mosques all over Dresden.

“I looked out of the window and saw how somebody with a motorcycle helmet threw something,” the imam’s son, Ibrahim Turan, told the daily Bild newspaper. “First I thought it was a stone, but then there was a loud bang and the door was on fire.”

The second device exploded shortly after the first on a terrace between a hotel and the International Congress Center, a facility which can accommodate 6,000 people for conferences. The blast destroyed a decorative glass block on the outdoor terrace. Police evacuated the hotel bar and asked people to stay away from windows at the hotel building.

Some 50 officers were involved in the overnight operation, police said.

Police President Kretschmar said the two explosions could have also been connected to Germany’s national unification celebrations next Monday, which will be held in Dresden.

Dresden is the state capital of Saxony which has seen a lot of racist attacks recently.

The German government published a report last week warning that there had been an increase of racist and far-right attacks in eastern Germany which it called “a big threat for the development of the society and economy.”