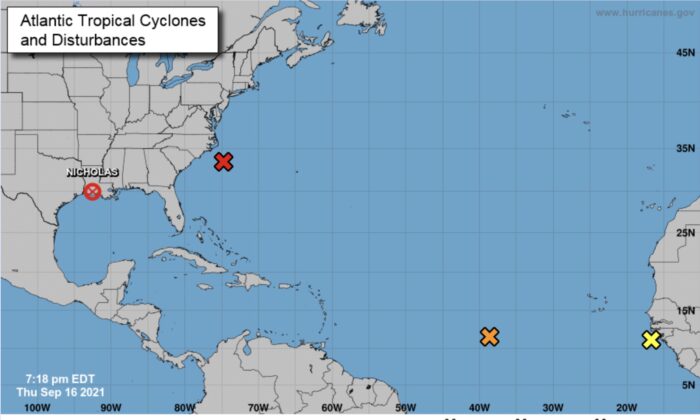 2 Atlantic Disturbances Could Be Tropical Depressions Soon; There’s Another Wave, Too

By Michelle Marchante and Alex Harris
From Miami Herald

MIAMI—Forecasters are monitoring three disturbances Thursday and two have a high chance of turning into tropical depressions soon as they move across the Atlantic.

None of the systems is currently a threat to Florida.

The disturbance closest to the United States is several hundred miles to the south-southeast of the outer Banks of North Carolina, according to the National Hurricane Center.

Forecasters expect the system will turn into a tropical depression in the next day or two as it moves north-northwest to northward off the southeast U.S. coast.

It has a 70 percent chance of formation in the next two to five days. An Air Force Reserve reconnaissance aircraft was scheduled to check out the system later Thursday.

“Regardless of development, this system could bring high surf to portions of the southeast and mid-Atlantic U.S. coast later this week,” the hurricane center said.

The other disturbance forecasters are closely monitoring was producing showers and thunderstorms in the far eastern Atlantic early Thursday, about 500 miles west-southwest of the Cabo Verde Islands.

While satellite data indicates that the system still lacks a well-defined center, the environmental conditions are favorable for development and it will likely become a tropical depression in the next couple of days, according to the hurricane center.

Right behind it is a tropical wave that is forecast to emerge off the west coast of Africa by the end of the week. Forecasters expect environmental conditions will be “somewhat conducive” for development as it moves west-northwest to northwest over the Atlantic.

However, its formation chances remain low at 10 percent for the next 48 hours and 20 percent through the next five days.

As for the remnants of Nicholas, the hurricane center issued its final advisory on the system early Thursday. The Weather Prediction Center will continue to provide updates as long as the system remains a flood threat.

The next storm names on the list are Odette and Peter.