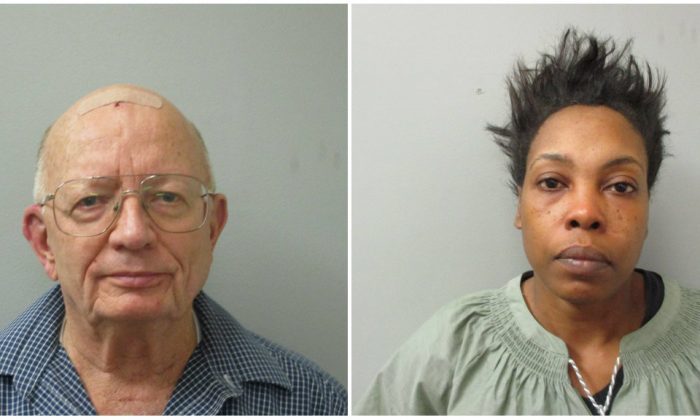 John Chapman and Chequita Jenkins were arrested after they allegedly fought at a restaurant in Alabama over crab legs. (Huntsville Police Department)
Crime and Incidents

2 Arrested After Brawl Over Crab Legs at Buffet Restaurant

A dispute over crab legs that escalated into a brawl surprised diners at an Alabama restaurant, as well as a police officer who was trying to enjoy a meal. The two people involved have been arrested and are facing misdemeanor charges.

Huntsville police officer Gerald Johnson told WHNT that he had just sat down and had taken only two bites from his plate when the fight broke out at Meteor Buffet on Feb. 22.

It started when crab legs were late getting to the buffet. It ended with customers using crab tongs like fencing swords and thrown dishes. Details on the crab buffet brawl in Huntsville. https://t.co/EIBsLnCeav pic.twitter.com/at32IYtf67

The officer said the diners were waiting impatiently in line for crab legs before they lost their tempers.

Johnson described the scene as a “fencing match” where diners were using their tongs like swords, reported the news station. He said, “It’s not something you typically hear.”

“They’d been waiting there for the crab legs for a good 10, 20 minutes. When they finally came out, it’s very heated. Especially if someone is taking more than their fair share.”

John Chapman and Chequita Jenkins were arrested as a result of the brawl. The argument left Chapman with a laceration on his head. Jenkins was not hurt.

Johnson said that after talking to the pair, they admitted they let their anger get the best of them.

Chapman is facing disorderly conduct, while Jenkins was charged with third-degree assault. If found guilty, they could end up being fined a couple hundred dollars.

One of the women involved said she and her son don't even eat seafood.

A 21-year-old man named Vinnie Avery was punched in the face and suffered a cut lip and broken front tooth. His mother, Denise Avery, was also attacked. She used pepper-spray in self-defense and to protect her son. She suffered a broken nose and a concussion, according to Hartford Courant, citing a police report.

Denise told the news website at the time that the dispute was actually not over crab legs, and that they don’t even eat seafood. Instead, the argument started after Denise complained to restaurant staff about a young child with the Knight couple who was running her fingers through the water in the crab leg bowl. She and other diners thought it was unsanitary.