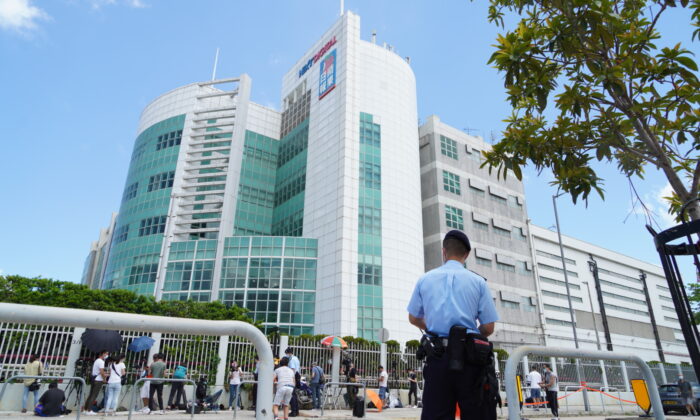 Two Apple Daily executives have been charged under Beijing’s draconian national security law, a day after more than 500 police officers raided the newspaper’s headquarters and arrested five executives. The Apple Daily is one of Hong Kong’s only remaining independent newspapers.

According to a Hong Kong government release published after 3 p.m. local time on Friday, police charged two men, aged 47 and 59, for “conspiracy to endanger national security.”

Apple Daily confirmed that the two men charged this afternoon are CEO Cheung Kim-hung and Chief Editor Ryan Law, citing its own sources. The pair will be brought to West Kowloon Magistrates’ Courts for mention on Saturday morning, the government statement said.

On Thursday, a Hong Kong police official said the collusion charge was in relation to over 30 articles published by the outlet since 2019 that sought to have foreign countries impose sanctions on China or Hong Kong. This marks the first time that authorities have cited media articles as potentially violating the national security law.

Hong Kong’s Security Secretary John Lee accused the executives of using journalism as a “tool to endanger” national security, while cautioning “normal journalists” to keep their distance from the “criminals” at the paper.

Yesterday’s raid came less than a year after 200 Hong Kong police officers stormed the newsroom in August 2020, a month after the national security law took effect.

Jimmy Lai, Apple Daily’s founder, has been in jail since December 2020 after his arrest in August last year. He was charged under the national security law and for his role in pro-democracy, anti-Beijing protests in 2019.

Thursday’s arrests were “a new low in a bottomless assault on press freedom,” Human Rights Watch said, while Amnesty International accused Hong Kong authorities of “ramping up their crackdown on press freedom and using the pretext of ‘national security’ to justify it.”

Hong Kong’s Foreign Correspondents’ Club issued a statement saying that it was “concerned that this latest action will serve to intimidate independent media in Hong Kong and will cast a chill over the free press,” guaranteed under Hong Kong’s Basic Law.

Western governments and lawmakers also condemned the raid, saying it showed Beijing was using a draconian national security law to suppress dissent and silence free press in the city.

U.S. Sen. Rick Scott (R-Fla.) in a statement on Twitter urged President Joe Biden and other democracies to condemn “this disgusting attack on the free press” and hold the Chinese Communist Party (CCP) accountable. Sen. Marco Rubio (R-Fla.), meanwhile, called for the release of the arrested executives, as well as founder Lai.

Frank Fang and Cathy He contributed to this report.