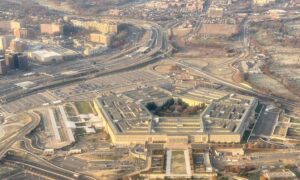 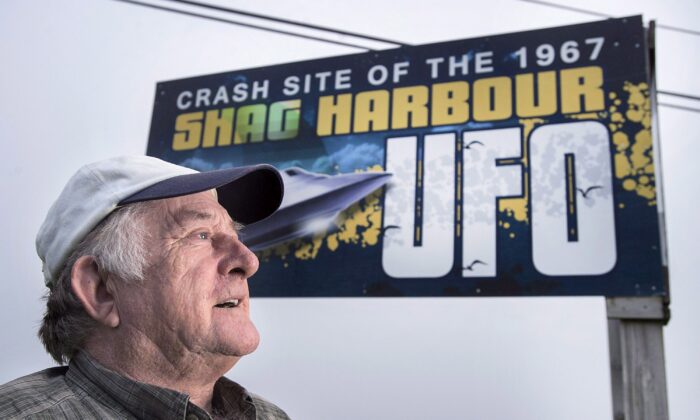 The fishing community of Shag Harbour has a unique attraction for tourists passing through southwest Nova Scotia: an interpretive centre commemorating one of Canada’s most famous UFO incidents.

Retired fisherman Laurie Wickens is president of the Shag Harbour UFO Incident Society that operates the centre. On the unforgettable night of Oct. 4, 1967, he was driving his ’56 Pontiac accompanied by four friends when some unusual lights appeared in the sky.

“There were four of them. One would go on in every part and all be on for a second, then all go off, and then they’d start over in that sequence,” Wickens, who was 17 at the time, recalled in an interview.

“We were just thinking it was a plane. We saw it for three or four minutes. It went from flying level to a 45-degree angle [downward] and we lost sight of it. … We went to the top of the hill. [From there] we saw the lights go in the water.”

Wickens found a payphone. “We called the RCMP and reported a plane crash. He didn’t believe me at first,” he said of the officer who took his call.

“The Coast Guard boat went out, the fishing boats went out. Nothing was found.”

As Wickens, RCMP officers, and other local residents watched from the shoreline, they saw a large orange light moving slowly across the water for about half an hour before it disappeared.

Two days later, Royal Canadian Navy divers with the Fleet Diving Unit Atlantic combed the seafloor of the Gulf of Maine off Shag Harbour looking for the object, which had been seen by scores of people including airline pilots and fishermen, but found nothing.

In recent times, UFO events are sometimes called unidentified aerial phenomenon (UAP). On June 25, the U.S. Office of the Director of National Intelligence released a preliminary report concerning over acknowledged UAPs between 2004 and 2021.

The report examined 144 sightings of “unidentified aerial phenomenon” by Navy pilots and others. Pilots reported near-misses with UAPs 11 times, while “unusual patterns or flight characteristics” were noted in 18 incidents.

Canada has also has its share of claimed sightings, with hundreds reported every year.

On the same night that Wickens and his friends saw the strange lights over Shag Harbour, 12-year-old Chris Styles saw a similar-looking UFO from his bedroom window that looked out over the waterfront 250 kilometres away in Dartmouth, N.S.

Since the early 1990s, Styles has researched the Shag Harbour incident extensively and written two books on the subject.

“You had about 70 witnesses, including three RCMP officers who were on duty. They saw it in the air and on the water,” Styles said in an interview.

He located a telex from Canadian Maritime Command to the Navy diving unit.

“At the top, they write UFO in big letters and underline it three times and put exclamation marks behind it,” he said. A memo by Colonel W. W. Turner reported, “The Rescue Coordination Centre conducted preliminary investigation and discounted the possibilities that the sighting was produced by an aircraft, flares, floats, or any other known objects.”

Officially, at least, the object was not found, something Styles said seems curious.

“You have to wonder about something that everybody agrees, even by the smallest estimate, was 60 feet across and circular and entered the water there. And the sound is pretty shallow, [yet] nobody found anything.”

When the RCMP went out in fishing boats to investigate, they saw something else that was curious aside from the orange light that had been seen for 30 minutes: a swathe of yellowish foam sitting on the water.

“There was a large streak of foam that was about 80 feet wide, half a mile long, where [the UFO] had gone along the surface of the water after it hit the surface,” Styles said.

“Seven divers were sent down, and those are the guys I found [to interview]. It was very easy for me because my best friend in high school, his dad trained all the divers and was running the unit at the time.”

Remarkably, the Navy divers and other military sources told Styles something they never told the public: The UFO later travelled to nearby Shelburne, nearly 50 kilometres northwest.

“The thing was moving under the water. [The Navy] had the Argus and S-2s dropping sonar buoys and were tracking it,” he explained. “Supposedly it came to rest on the seabed halfway between Government Point and the lighthouse on McNutts Island. … There were two [UFOs] sitting on the bottom there and one was giving some kind of assistance to the other.”

Styles’s sources told him that the UFOs stayed in the waters off Shelburne for a week until a Russian submarine entered the area, which was challenged by U.S. and Canadian ships that were on the scene.

“[The UFOs] start moving under the water back towards the Gulf of Maine. Once they get there just beyond Bon Portage Island, but still in the outer part of Shag Harbour, they surface and fly away.”

Unlike the copious paper trail of the Shag Harbour sighting, there is no hard evidence to back claims of the existence of UFOs at Shelburne.