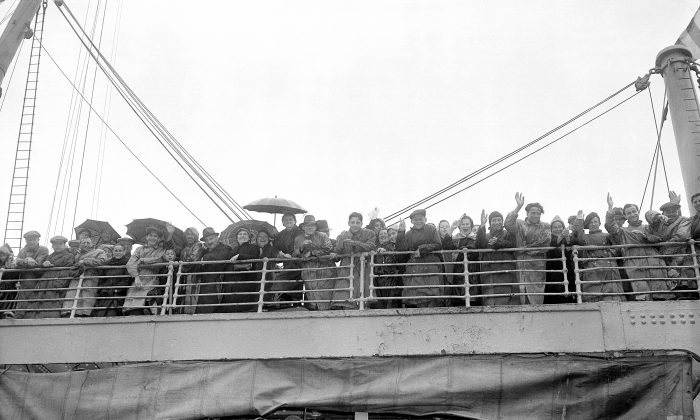 Jewish refugees from Britain get their first glimpse of North America as they dock at Halifax, Nova Scotia, Canada, on June 19, 1940. They are enroute to New York City to make a new life. (AP Photo)
US

A poll from July 1938 asking Americans what they thought of accepting Jewish refugees just before World War II has provoked lots of debate with links to the current Syrian refugee crisis.

As U.S. officials work to “pause” the resettlement program, some are pointing to the poll as an indication that America should keep accepting the refugees.

The poll from fortune magazine, as part of its quarterly survey of American public opinion, asked: “What is your attitude toward allowing German, Austrian, and other political refugees to come to the U.S.?”

The respondents overwhelmingly (67.4 percent) said that, “with conditions as they are we should try to keep them out.

Another 18.2 percent said that the refugees should be allowed in but immigration quotas should not be raised.

Just under 10 percent said they didn’t know, while the remaining 4.9 percent said that the refugees should be encouraged to come even if the quotas had to be raised.

US Jul ’38: What’s your attitude towards allowing German, Austrian & other political refugees to come into the US? pic.twitter.com/7hMfLbXWFE

Context and Another Poll

To provide context, author W.D. Rubinstein noted in his book “The Myth of Rescue” that Fortune provided few details about the survey. He also noted that the poll “differed from today’s survey techniques in attempting to poll a quota of respondents by matching their geographical and socio-economic characteristics with national census results.”

“It was not a random sample in the modern sense,” it added, also noting that the survey did not use the word “Jew” but instead mentioned “political” rather than “racial” or “religious” refugees.

Some other wording in the survey was suspect, but Rubinstein concluded the results were ultimately accurate.

“In the context of the Depression, only a minority of Americans were willing to admit significantly more refugees.”

A follow-up survey from Gallup in January 1939 asked Americans more directly about the situation, inquiring whether the country should take in 10,000 refugee children from Germany–“most of them Jewish.” 61 percent said no, compared with 30 percent saying yes.

US Jan 20 ’39: Should the US government permit 10,000 mostly Jewish refugee children to come in from Germany? pic.twitter.com/5cFs5RabQn

Many people on social media said the polls show why America should keep accepting refugees.

“We can’t make the same mistake again,” said one.

“History repeats itself only if we allow it to,” said another.

“Sometimes it is difficult to live your Christian beliefs to help those that need it most. Perhaps Jesus’ message was that by showing love and caring about others you can change people far more than all the hate and destruction you can bring to was once their homes,” said yet another.

But others noted there are key differences between those refugees and these ones.

“The Jewish were citizens of many countries being subjected to genocide from the Nazi Third Reich, whereas the Syrian refugees are all different religions just trying to get out of their war torn country. It’s different in that nature because there is terrorists sneaking in with these refugees and causing absolute chaos in the countries that give them safe haven,” said one Facebook user.

“Let’s not confuse the issue. Jewish people were not terrorizing other religions. They were being assassinated. Today Muslim people are terrorizing non Muslims,” added another.