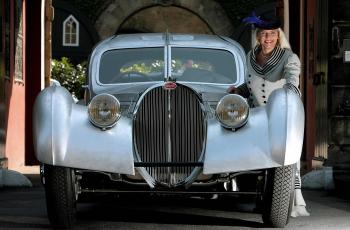 By Ian Ritz
Print
The 1936 Bugatti Type 57SC Atlantic was purchased buy a car museum for an undisclosed amount, which was said to be between $30-40 million, making it the single largest known automobile purchase in the history of the cosmos.

The Mullin Automotive Museum in Oxnard, California bought the classic super car for more than $30 million but less than $40 million said a source close to the sale to the Wall Street Journal.

The owner of the rare and seemingly priceless vehicle, Dr. Peter D. Williamson, passed away recently making the sale possible. No official statement has been made by his family regarding the matter.

Car collectors around the world had coveted Williamson’s one of a kind, mint condition 1936 tear drop bodied sports rarity for years but He refused to sell the car due to a deep sentimental attachment.

Before the sale of the 1936 Bugatti the most expensive car sale to date was a Ferrari Testa Rossa that sold for just over $12 million in 1999.

The 1936 Bugatti had a 200 hp engine and a top speed of 120 mph which was very impressive in its day. Only two or three functional models of the cars are still in existence and the owners are happy keeping them in their collections, reported auotmotto.org.

Jean Bugatti helped with the design of the Type 57 series which featured a third of the car being made out of aluminum. The model also sports oval doors, riveted fins, and kidney shaped side windows.