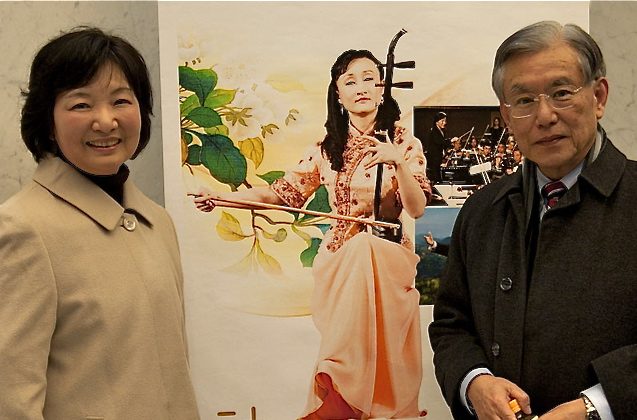 Praise for Shen Yun in Hiroshima

HIROSHIMA, Japan—Shen Yun Performing Arts, a New York based company, made its third stop in Japan at Hiroshima City Cultural Exchange Hall on Feb. 19. Locals were on hand to witness a classical Chinese dance based on virtue and pure beauty, and were deeply impressed with the 5,000 years of the Chinese divine culture.

Professor Bunzo Suzuki from Hiroshima University of Economics saw Shen Yun for the first time with his wife Eiko Suzuki. He had nothing but praise for the performance, saying, “It’s absolutely beautiful. It was a joy to watch. The tone of the soloists was just wonderful. I have never seen a performance as beautiful as Shen Yun.”

Eiko Suzuki, Professor of Ikebana at Takarazuka University, was once invited by the Hong Kong Ikebana International as a guest lecturer. As an art teacher, she noticed the coloring on stage from the very beginning.

“Color matching was done with such attention to detail. For example, the red with blossomed flower, the earthly green with the young bud, and the fresh green with leaves amidst white snow, all of these matched beautifully with the colors of the costumes. It was exceptionally magnificent,” she said.

Professor Eiko Suzuki was also deeply impressed by the loud voice of the tenor. And she pointed out that “the instruments within the orchestra included traditional Chinese music, and it was very pleasing. The live orchestra was splendid.”

She elaborated, saying, “The dance movements were so beautiful. The choreography was well thought out. And it is not just about the dance skill, the whole performance was gorgeous, and the difficult techniques could not be done with ease. These performers must have endured a long and arduous training.”

Shen Yun is also known for its breathtaking backdrops that set the stage from ancient gardens to Mongolian grasslands.

With a Ph.D. in Aesthetics, Professor E. Suzuki was fascinated by the backdrop, saying, “Because of the backdrop, the stories were easier to understand.”

Shizuka Numa, president of Hiroshima Association for International Communication and Exchange, was in attendance at the Shen Yun performance on her friend’s recommendation. Dressed up for the performance, she told the reporter her feelings of watching Shen Yun for the first time.

“Sitting on the best seat to appreciate such a beautiful performance as Shen Yun, I feel very lucky!” she said in excitement, placing her hands against her chest.

“Shen Yun’s each dance is flawless, conveying the charm that has never been experienced. Performances by the performers are top-notch,” Shizuka Numa said admiringly.