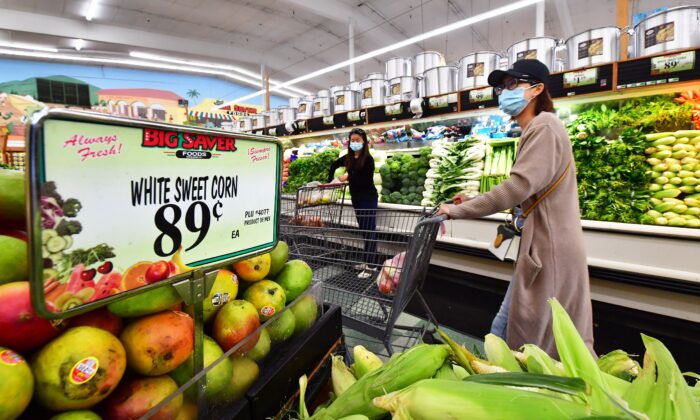 During a period of high inflation in the U.S. economy, a woman shops for groceries in Rosemead, Calif., on April 21, 2022. (Frederic J. Brown/AFP via Getty Images)
Inflation

19 Percent of Americans Have Cut Grocery Spending Due to Inflation: Survey

Americans restricted their spending activities in the first quarter of 2022 amidst a rise in inflation according to American Consumer Credit Counseling (ACCC).

Over 93 percent of respondents to ACCC’s first quarter Financial Health Index survey admitted that they were impacted by the rising cost of commodities, an April 25 press release said. While 19 percent have scaled down their grocery budgets, over 30 percent cut down fuel expenses. A third said they reduced spending on entertainment, while almost half have postponed or modified vacation and travel plans.

“This surge in costs across just about every category of consumer goods is a significant burden on American households,” said Allen Amadin, president and CEO of ACCC.

“Discretionary spending is generally the first thing to be curbed during times of financial crisis,” Amadin said. “When people are forced to buy fewer groceries or change their commuting habits, we have entered an entirely new level of challenge.”

Twelve-month U.S. inflation accelerated to 8.5 percent in March 2022, the biggest such increase since December 1981. The cost of fuel oil rose by over 70 percent, gasoline by 48 percent, and food prices by 8.8 percent, according to the U.S. Bureau of Labor Statistics.

In the ACCC survey, almost 60 percent of the respondents said they were either “not confident at all” or “not so confident” in the American economy. With regard to debt, 40 percent of respondents remained confident they could reduce their household debt by at least 10 percent over the next six months.

Rising prices have also triggered a change in consumer buying behavior, with shoppers purchasing smaller packages of their favorite items, said Sally Lyons Wyatt, executive vice president of client insights at IRI, in a recent webinar, according to Baking & Snack.

“The reason you’re starting to see this wheel of growth across sizes is some consumers can only afford that smaller pack size to get their favorite brands or favorite products,” she said. “They might not be able to afford the larger size.”