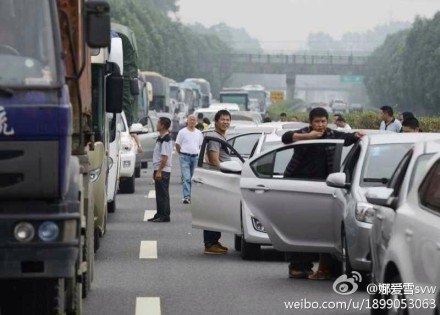 As of the afternoon of Oct. 1, a total of 129 traffic impediments nationwide were reported due mainly to traffic accidents and jams, most of them happened in Beijing and provinces of Shandong and Shanxi, according to official reports. (Weibo.com)
China

At least 19 people were injured in a multi-vehicle crash on the Beijing-Tibet Highway, also known as the Beijing-Lhasa Expressway, on Oct.1, the first day of China’s “golden week,” a week long national holiday.

The crash occurred on the Guanmahu section of the highway in the city of Wuzhong, northwest China’s Ningxia Province on Tuesday morning. A total of six people suffered serious injuries- five with broken bones and one with lung contusion, said China National Radio (CNR). The pileup involved 34 vehicles, including oil tankers, buses, trucks and cars.

The week- long holiday is considered a good opportunity for millions of migrant workers who work far away from their families to make the trip home to their loved ones.

China’s highways witnessed a traffic surge on National Day. As of Tuesday afternoon, a total of 129 traffic impediments nationwide were reported, due mainly to traffic accidents and jams, most of them in Beijing and the provinces of Shandong and Shanxi, according to the China’s Ministry of Transport, as reported by Taiwan’s Central News Agency.

Vehicles on the Beijing Airport Expressway were stuck in a 5-mile traffic jam on Tuesday, as reported in the Beijing Evening News. There were frequent accidents owing to poor visibility in rainy weather, the report said.

“A massive traffic jam occurred early this morning and lines of cars are endless…Highways are turning into parking lots… Those who are not stuck on the road are very blessed!”

“Drivers and passengers got out of vehicles as their cars were stranded on the highway, walking dogs or taking strolls, yet just hoping for cars to start moving…”

At least 610 million vacationers are expected to travel by road and waterway during the week-long holiday, according to the ministry, as reported by Taiwan’s Central News Agency.

Translated by Euly Luo. Written in Engish by Christine Ford.