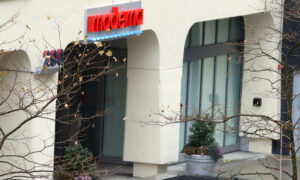 A nearly 19-foot Burmese python was killed by a man in Miami, it was reported on Monday.

Jason Leon was driving in Miami-Dade County late at night when he spotted the snake in the bushes, reported the Naples News. He then pulled the snake from the roadside, but it wrapped around his leg, prompting him to call for help.

Leon then was forced to kill the snake with a knife, according to the paper.

“Jason Leon’s nighttime sighting and capture of a Burmese python of more than 18 feet in length is a notable accomplishment that set a Florida record. The FWC is grateful to him both for safely removing such a large Burmese python and for reporting its capture,” Kristen Sommers, with the Florida Fish and Wildlife Conservation Commission, said in a news release.

According to the agency’s Facebook page, the snake was not carrying eggs.

Leon had once owned Burmese pythons as pets and had experience handling the large snakes, the FWC added.

The snake was 18 feet and 8 inches long, meaning it was the largest snake ever captured, reported WFLX-TV. The snake weighed 128 pounds.

The previous record for a python in Florida was 17 feet and 7 inches.