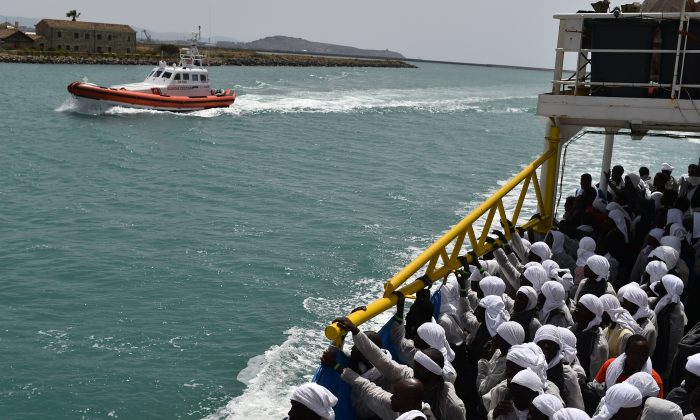 Migrants arrive in the port of Cagliari, Sardinia, aboard rescue ship "Aquarius", on May 26, 2016, two days after being rescued near the Libyan coasts. (Gabriel Bouys/AFP/Getty Images)
Europe

At least 19 died and 103 people were rescued Wednesday when a boat carrying migrants sank off the coast of northern Cyprus. Rescuers are now searching for 25 other people.

Turkey’s coast guard said that the migrants’ boat sank near the town of Yeni Erenkoy, the state-run Anadolu Agency in Turkey reported. The rescued migrants were taken back to Turkey.

An official, speaking on condition of anonymity, told The Associated Press that one seriously injured person was being treated in a hospital in Cyprus.

According to Reuters, a Panama-flagged commercial ship spotted the migrant boat about 25 miles from Turkey’s southern province of Antalya. The ship alerted the Turkish coast guard on Wednesday morning.

Authorities told AP that they estimated that 147 to 150 people were on board the boat. They said that it’s not clear if everyone on the boat were migrants.

It comes after Proactiva Open Arms, a Spanish rescue group, accused the Libyan coast guard of abandoning a woman and her toddler to their deaths in the Mediterranean Sea after intercepting 160 migrants who were bound for Europe, NBC News reported. The group said it found three people in the remains of a destroyed boat about 80 miles from the coast of Libya.

According to a Reuters report, Libya’s coast guard disputed the claim, saying that it rescued 165 migrants from the boat. “It is not in our religion, our ethics or our conduct to abandon human lives at sea, where we only came to save them,” it said in a statement.

The U.N.’s International Organization for Migration said on July 17 that more than 1,400 migrants have died in the Mediterranean since the start of 2018.