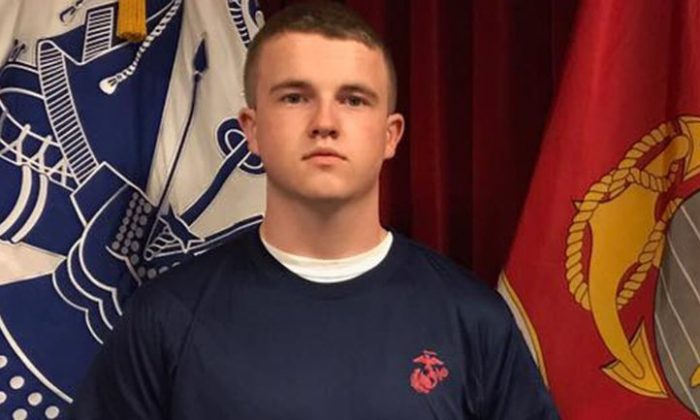 An 18-year-old who was killed in a tragic ride malfunction at the Ohio State Fair on Wednesday had just joined the Marines last week, Fox 8 reported.

Tyler Jarrell of Columbus, Ohio, enlisted with the U.S. Marine Corps last Friday. He was to be begin training next summer.

On July 22, the South Columbus Ohio Marine Recruiting Office had posted a photo of Jarrell congratulating him on joining the Marines.

After a piece of the fair ride that Jarrell was on snapped off, the teen was ejected from the fair ride and landed on the ground 50 feet away, dying on impact. His girlfriend, Keziah Lewis, was among seven others injured.

One of his relatives wrote an emotional post following the tragedy.

“He worked for me since he turned 16. He was a good kid who just passed his physical and was accepted into the marines last Thursday,” said the woman, according to Heavy.com

The malfunction occurred at about 7:20 p.m., Wednesday evening. Video footage shows a portion of the ride snapping off, slamming into a barricade, and ejecting several riders.

The fatal malfunction occurred on the opening day of the fair. Ohio Gov. John Kasich called Wednesday’s tragedy the worst in the fair’s history.

“I am terribly saddened by this accident, by the loss of life and that people were injured enjoying Ohio’s fair,” said Kasich said.

Kasich ordered all 71 of the rides shut down for re-inspection. The fair reopened on Thursday with all of the rides closed.

“Our hearts are heavy for the families of those involved in last night’s tragic accident,” a message from the fair’s official Twitter account says. “We have shut down all rides until the state has inspected each and every ride again and deemed them to be safe.”

The Fire Ball was inspected at least three times before the fair opened, according to Michael Vartorella, chief inspector of amusement ride safety for the Agriculture Department.

He added that the inspections were not rushed, although inspectors worked through the night because of recent storms and flooding in the area.

“We take this job very serious, and when we have an accident like this … it hits us really hard,” he said.